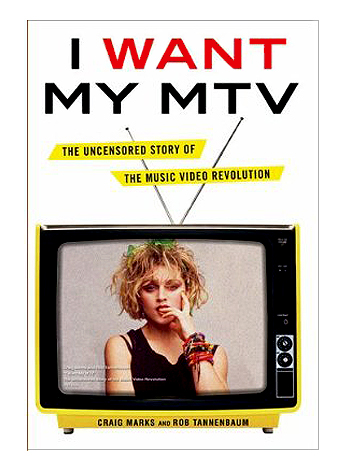 This book appealed to me because I’m part of its target audience – folks in their 30s or 40s who experienced MTV as teenagers – when its programming was all videos, all the time, and kids watched to see their favorite bands, learn about new music, and have something to talk about at school the next day.   And if you were the first kid on the block to get cable back in 1981, the entire neighborhood was coming over to check it out –  an experience unique to that generation!

I Want My MTV tells the story of this first decade of MTV, its creation, success and transformation into a home for shows like The Jersey Shore.

You can learn about Madonna’s early days as a skateboarding punk in New York, how MTV execs convinced Mick Jagger to say “I want my MTV” for $1. Or that the car on the cover of a ZZTop album cost $250,000, so they put it in their videos to get the tax deduction?  (Sharped Dressed Man and Legs come to mind)

This book is full of stories about dwarves and models and rock stars on cocaine, but it’s also a very traditional story of a startup company – how it almost failed, the mistakes they made, the things that turned out to be genius moves that were accidents and surprisingly how close it came to going off the air.

I Want My MTV is a wild joyride but it’s also a well-researched historical document.  It’s all here.  Dudes in eyeliner, chicks with guitars, profit margins, demographics, pyrotechnics.   Anyone who came of age during the 80s will be transported back in time to a day when the remote control had a long wire attached to it!  Great fun!