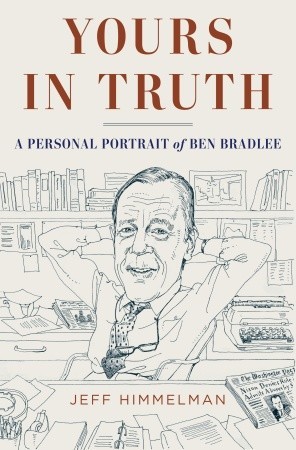 “I hope we’re as good friends when you finish your book as we are now,” Ben Bradlee, the legendary former executive editor of The Washington Post, told Jeff Himmelman in March 2010. “But I don’t give a [expletive deleted] what you write about me.”

No author could make this man uninteresting.
Yours in Truth, begun as a follow up to Bradlee’s 1996 autobiography A Good Life, creates a far more intimate portrait of the much celebrated and sometimes maligned Bradlee and all of his flair, failures, courage, profanity and charisma.

It covers, extensively, his close relationship with his boss, publisher Katharine Graham, his friendship with John F. Kennedy, the Pentagon Papers, the Watergate Period with Woodward and  Bernstein, the resignation of Richard Nixon, and scandalized Post reporter, Janet Cooke, whose fabricated story of an eight-year-old drug addict won a Pulitzer Prize that had to be returned.

Great for fans of history, politics, journalism and biography.