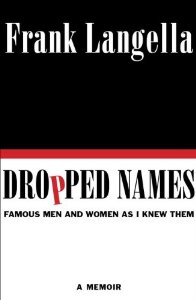 I first took notice of this book when I saw the author, actor Frank Langella interviewed on The Tavis Smiley Show to discuss his memoir of the remarkable people encountered over his fifty year career.  He presents them, not as they might have described themselves, but as he perceived them – a theme he emphasizes often.  What follows is more than 70 essays recounting time spent with notable figures that include Arthur Miller, the Queen Mother, Jackie Kennedy, Paul Newman, Elizabeth Taylor, Laurence Olivier and many many more.

Nearly all of his subjects are deceased and the book is arranged in order of their passing beginning with Marilyn Monroe and ending with Rachel “Bunny” Mellon, the only of his subjects still with us.

There are many ways to look at this.  As presented, Dropped Names is a refined memoir of a life among the elite, but it’s largely a book full of juicy and often mean-spirited gossip including a skillful deflating of some of the largest egos in Hollywood (notably Yul Brynner,  Rex Harrison and Charlton Heston).  At the same time, he tells stories of deep and loyal friendships, Alan Bates and Raul Julia among them.

“It’s obvious that Langella has complex feelings toward some of his subjects — as much as he wants to like Paul Newman, for instance, he can’t get past the fact that the man was, in his words, a “bore” — but it also seems obvious that the more attracted he is to the subject, the more positively they tend to be described.”

But all in all, we learn that fame turns nearly everyone — politicians, royalty, writers and socialites — into actors desperate to perfect their image in front of a world audience.  The book includes a handy table of contents so you can pick and choose who you read about, but in the end I wound up reading every entry.

One thought on “Dropped Names: Famous Men and Women As I Knew Them by Frank Langella”