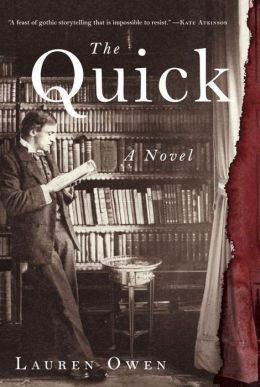 This debut novel is not due out until June 17th, but I was fortunate to have won an ARC (advanced readers’ copy) in a Goodreads contest. The Quick is about the Norbury siblings, James and Charlotte and takes place mostly during 1892. When James graduates from Oxford he sets out for London hoping to become a successful poet. Instead, he meets the aristocratic Christopher Paige and is immediately drawn into his sophisticated world of balls, operas, and plays. He changes his writing from poetry to that of a playwright. The two young men quickly become more than just friends and shortly thereafter Christopher is found horrifically murdered and James has disappeared. When Charlotte Norbury ceases to hear from her brother she leaves their country home and heads for London hoping to find him. What she discovers is horrifying, macabre, and beyond her wildest imagination. To give you an idea of how much I loved this book, I have a whole pile of library books waiting patiently to be read as nd I was right in the middle of reading a book on my Kindle. Out of curiosity I thought I’d read the first chapter of The Quick, and then go back to it later. Well, two days later I finished this 500+ page masterpiece and 3 days later I’m still thinking about it. I know it’ll be one of those books I’m going to want to read again at some point. The only way as I can sum up the theme of this book without giving too much away is that it’s a bit of a mix between Deanna Raybourn, Mary Shelley, Bram Stoker, Edgar Allan Poe, with perhaps even a little H.P. Lovecraft thrown in. So if you like gothic horror, I recommend you put yourself on hold for this gem immediately as its already in the library’s catalog.

Click here to be taken to The Quick‘s listing in the catalog.