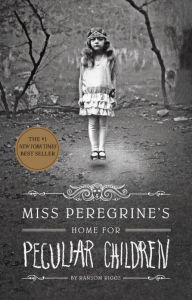 Miss Peregrine’s Home for Peculiar Children is a book that has been lingering on my tbr list for years, and I finally read it as my #ReadHarder pick for an independently published book. Unfortunately, it was kind of meh once I’d finished. (Like, I had a tingling to know what happens in its sequel, Hollow City, but just enough to look up the answer on Wikipedia instead of actually reading the book. Does that say something about me or about the book??)

First, though, I have to give props to Ransom Riggs: he created a seriously inventive atmosphere with Miss Peregrine’s setting, characters, and plot. With that said, however, something always felt lacking, like maybe a plot point could have been explored further or maybe a character’s motivation felt weak – but, of course, I cannot articulate that thing. Also, for about half of the photographs, it seemed like Riggs had to push himself to think up an appropriate back story that would complement whatever “weird” picture he had included in the text, and it ended up feeling like he limited the story and its characters by forcing the inclusion of said photographs. Could Riggs’s story have been different had he not had visual cues for his characters? Would a plot point or relationship have evolved more organically if he didn’t have to hit all those specific stops along the way? (I just don’t know.)

All in all, Miss Peregrine’s Home for Peculiar Children was good, but not great or exciting or altogether memorable. And I think I’m more upset that I thought it was going to be so good rather than that it wasn’t that great. (#ugh Do I even make any sense???)

(PS. I think maybe I was also very excited because Riggs and John Green were in the same graduating class at Kenyon College AND he’s married to Tahereh Mafi – but, alas, that’s about excited as I got about the book.)