In our Today In History Reading List feature, we take the events of a particular day in history and give you a work of fiction and a work of non-fiction relating to that day’s events. 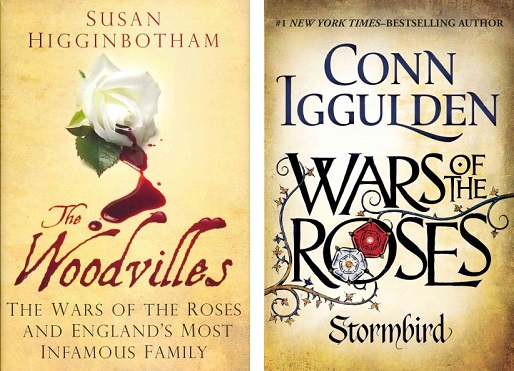 Non-Fiction: The Woodvilles: The Wars of the Roses and England’s Most Infamous Family by Susan Higginbotham

In 1464, the most eligible bachelor in England, Edward IV, stunned the nation by revealing his secret marriage to Elizabeth Woodville, a beautiful, impoverished widow whose father and brother Edward himself had once ridiculed as upstarts. Edward’s controversial match brought his queen’s large family to court and into the thick of the Wars of the Roses. This is the story of the family whose fates would be inextricably intertwined with the fall of the Plantagenets and the rise of the Tudors [Goodreads]

Fiction: Wars of the Roses: Stormbird by Conn Iggulden

King Henry V – the great Lion of England – is long dead. In 1437, after years of regency, the pious and gentle Henry VI, the Lamb, comes of age and accedes to the English throne. His poor health and frailty of mind render him a weakling king -Henry depends on his closest men, Spymaster Derry Brewer and William de la Pole, Duke of Suffolk, to run his kingdom. Yet there are those, such as the Plantagenet Richard, Duke of York, who believe England must be led by a strong king if she is to survive.  [Goodreads]

A force of English privateers under the command of John Hawkins and Francis Drake were routed by a Spanish fleet off the coast of modern day Venezuela. 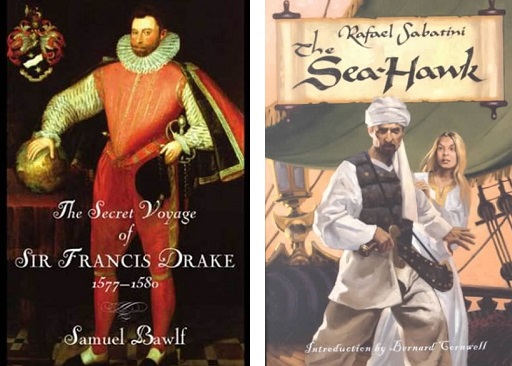 Samuel Bawlf masterfully recounts the drama of this extraordinary expedition within the context of England’s struggle to withstand the aggression of Catholic Europe and Drake’s ambition for English enterprise in the Pacific. He offers fascinating insight into life at sea in the sixteenth century–from the dangers of mutiny and the lack of knowledge about wind and current to the arduous physical challenges faced every day by Drake’s men. But it is Bawlf’s assertion of Drake’s whereabouts in the summer of 1579 that gives his book even greater originality. From a seminal study of maps of the period, Bawlf shows with certainty that Drake sailed all the way to Alaska–much farther than anyone has heretofore imagined–thereby rewriting the history of exploration. [Googreads]

Fiction: The Sea-Hawk by Rafael Sabatini

Oliver Tressilian, a Cornish gentleman who helped the English defeat the Spanish Armada, is betrayed by his ruthless half-brother and seeks refuge in the Middle East, where he takes on a new role as a Barbary pirate. [Goodreads]

The Lewis and Clark expedition had left St. Louis in May 1804 and traveled to the Pacific Northwest before returning two years later. It is estimated the traveled almost 8000 miles. 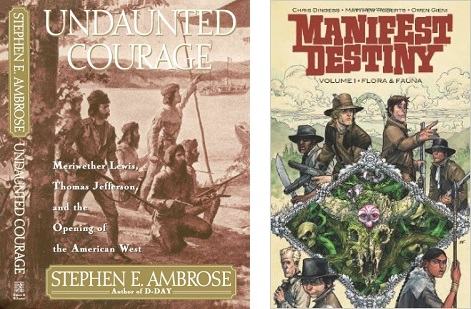 In 1803 President Thomas Jefferson selected his personal secretary, Captain Meriwether Lewis, to lead a pioneering voyage across the Great Plains and into the Rockies. It was completely uncharted territory; a wild, vast land ruled by the Indians. Charismatic and brave, Lewis was the perfect choice and he experienced the savage North American continent before any other white man. UNDAUNTED COURAGE is the tale of a hero, but it is also a tragedy. Lewis may have received a hero’s welcome on his return to Washington in 1806, but his discoveries did not match the president’s fantasies of sweeping, fertile plains ripe for the taking. Feeling the expedition had been a failure, Lewis took to drink and piled up debts. Full of colourful characters – Jefferson, the president obsessed with conquering the west; William Clark, the rugged frontiersman; Sacagawea, the Indian girl who accompanied the expedition; Drouillard, the French-Indian hunter – this is one of the great adventure stories of all time and it shot to the top of the US bestseller charts. [Goodreads]

In 1804, Captain Meriwether Lewis and Second Lieutenant William Clark set out on an expedition to explore the uncharted American frontier. This is the story of the monsters they discovered lurking in the wilds [Goodreads]

1969 The Trial of the Chicago Seven Begins

Abbie Hoffman, Jerry Rubin, David Dellinger, Tom Hayden, Rennie Davis, John Froines, and Lee Weiner were tired in connection to counterculture demonstrations in Chicago during the 1968 Democratic National Convention. Although over the course of the trial and appeals process some defendants were convicted or acquitted none served jail time or paid fines. 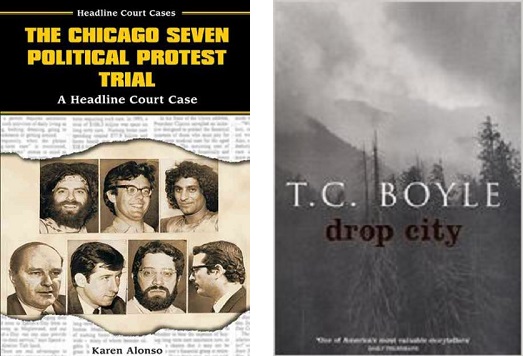 A library of high-interest, high-impact trials in American History. Good for reports and classroom debate.Focuses on the people behind the cases, and the impact the cases had on society. [Goodreads]

It is 1970, and a down-at-the-heels California commune devoted to peace, free love, and the simple life has decided to relocate to the last frontier—the unforgiving landscape of interior Alaska—in the ultimate expression of going back to the land. Armed with the spirit of adventure and naïve optimism, the inhabitants of “Drop City” arrive in the wilderness of Alaska only to find their utopia already populated by other young homesteaders. When the two communities collide, unexpected friendships and dangerous enmities are born as everyone struggles with the bare essentials of life. [Goodreads]