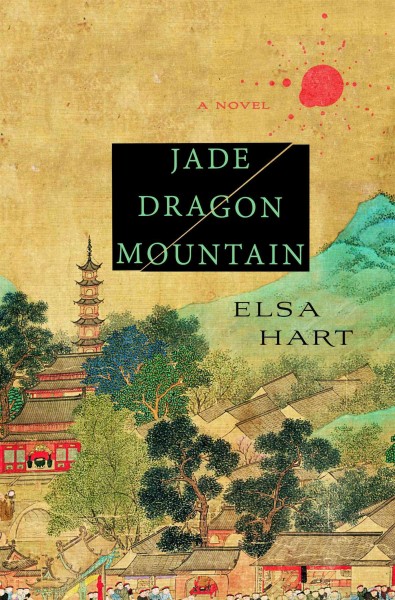 One of the things I’m always on the look out for is historical fiction set in an under represented time periods and locations. Elsa Hart’s Jade Dragon Mountain fits both of those categories. This is Hart’s first novel and it is set in 1708 in Yunnan province the border region between China and Tibet. She actually wrote it in Lijiang the city that grew up around the old city of Dayan.

The main character is Li Du, the former imperial librarian. Li Du arrives in the provincial capital of Yunnan, Dayan on the eve of a solar eclipse. This same eclipse is going to be hosted by the Chinese Emperor. This isn’t good news for Li Du. Firstly Dayan is packed with people from all over, there to see the eclipse/emperor. Second he has been under a sentence of exile from the capital for knowing the wrong people in the Forbidden City. He’s been on the road for five years heading west. He comes to Dayan planning to leave China for Tibet. Unfortunately before he can go, a Jesuit astronomer dies suddenly. It is clear to Li Du that its a murder but the powers that be want to cover it up. Li Du has to decide if he is going to Tibet or going to solve the crime.

The mystery is only a part of this story. Hart does an excellent job of drawing the setting of a Chinese provincial city on the edge of the empire. Mansions, hovels, inns and streets are described in loving detail. The characters themselves are also come to life in this book. Besides Li Du there are is a wealth of characters: Hamza a gregarious middle eastern story teller, Tulishen the provincial governor and cousin of Li Du, Tulishen’s concubine Lady Chin, Sir Nicolas Grey ambassador of the British East India Company and many more. All are potential suspects under Li Du’s careful eye. Oh and there is a really awesome sounding tellurion. Seriously I was disappointed there wasn’t a drawing it sound so cool.

This is a great book for any lovers of complexly plotted moderately paced historical fiction. You will get sucked in and want to run off to Yunnan province when you are done.