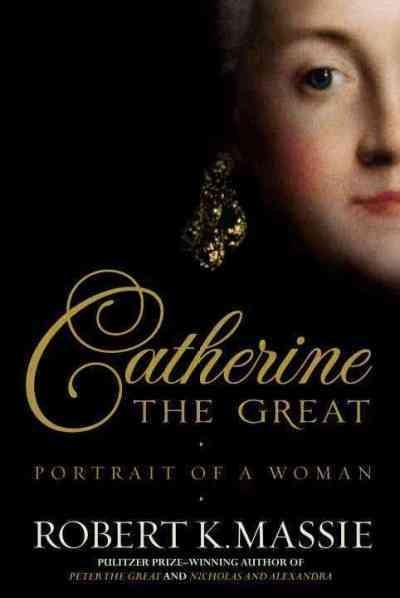 If you have seen any of the flyers, you know the library has a new History Book Group that meets every third Wednesday of the month at 7:00pm. Massie’s Catherine the Great is this month’s book (which we will be discussing this evening; all are welcome).

It’s a long one, clocking in at 929 pages. When Massie says “Portrait of a Woman,” he means it. This book traces the life of Catherine from her early life as the unappreciated daughter of the minor German prince of Anhalt-Zerbst, Christian August and Johanna Elisabeth, through her spectacular rise to greatness, first as the wife of Peter of Holstein-Gottorp, heir to the Russian throne then as Tsarina in her own right. This is a story of countless twists and turns, many of them involving the odd, to modern eyes, vicissitudes of dynastic inheritance. For example, Elizabeth I of Russia becomes Tsar by usurping the throne from her baby cousin, Ivan VI. She doesn’t want to marry and have children (likes partying too much) so she brings in a nephew, Peter, who is the deranged prince of Holstein-Gottorp, and declares him her heir. Then she brings in Catherine, also a relative, to be Peter’s wife. And there you are: succession solved. Only there’s a lot more to it than that, since Peter was more than a little insane and only ends up ruling for 6 months before Catherine overthrows him and, with the help of various lovers, friends, and political allies, makes herself Tsar.

This book is also a great look at the world of the 18th century. Catherine as Tsarina was a major patron of the arts and of scholarship. She was friends with major enlightenment scholars like Voltaire and Denis Diderot (the rock stars of the 18th century). She was also a major player in foreign affairs. She had a small role in the Seven Years War, and then a much larger role in putting a puppet King (and former lover) on the Polish throne, and then deciding the Poland up between Russian, Austria and Prussia. In short, even if you don’t find Catherine that fascinating this is a great book for seeing the 18th century through.

If you are interested in attending our History Book Group, our next book, to be discussed on March 16th at 7:00pm, is Basilica: The Splendor and the Scandal: Building St. Peter’s by R. A. Scotti. Copies of the book will be available at the library.

The schedule-so-far is as follows:

April 20th | In the Wake of the Plague: The Black Death and the World It Made by Norman F. Cantor
May 18th | Liberty’s Exiles: American Loyalists in the Revolutionary World by Maya Jasanoff
June 15th | As If An Enemy’s Country: The British Occupation of Boston and the Origins of Revolution by Richard Archer