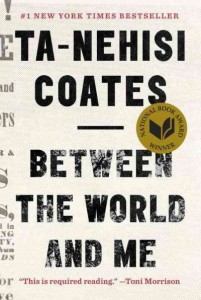 Americans have built an empire on the idea of “race,” a falsehood that damages us all but falls most heavily on the bodies of black women and men—bodies exploited through slavery and segregation, and, today, threatened, locked up, and murdered out of all proportion. Beautifully woven from personal narrative, reimagined history, and fresh, emotionally charged reportage, Between the World and Me clearly illuminates the past, bracingly confronts our present, and offers a transcendent vision for a way forward.

I finished Between the World and Me months ago, but I have yet to write more than the following 46 words in response: Between the World and Me is a short read, but neither quick nor light. Instead, Atlantic writer Ta-Nehisi Coates packs what amounts to a generation-spanning gut punch into just over 150 pages, asking open-ended and hard-to-answer questions about race in a letter to his fifteen-year-old son.

Part of it is procrastination, that it’s simply been too long since I closed the book, that whatever I wanted to say has been lost to competing narratives and the passage of time. And then part of it – maybe the bigger part, the whole part – is that I just can’t think of any words to adequately express how I felt after closing the book. Words that define what I’m still feeling now. Words to explain what I’ll still be feeling until one day, maybe I’m not.

I don’t know such words, can’t find them, or build them, or string them together. Perhaps it’s just better if you find the words for yourself.

Post script: Between the World and Me made me think of two other books: The Short and Tragic Life of Robert Peace by Jeff Hobbs and Negroland by Margo Jefferson. Among a list of many, they’re two solid explorations into what it means to be black in America – as well as confirmation of the need for intersectionality when describing race.