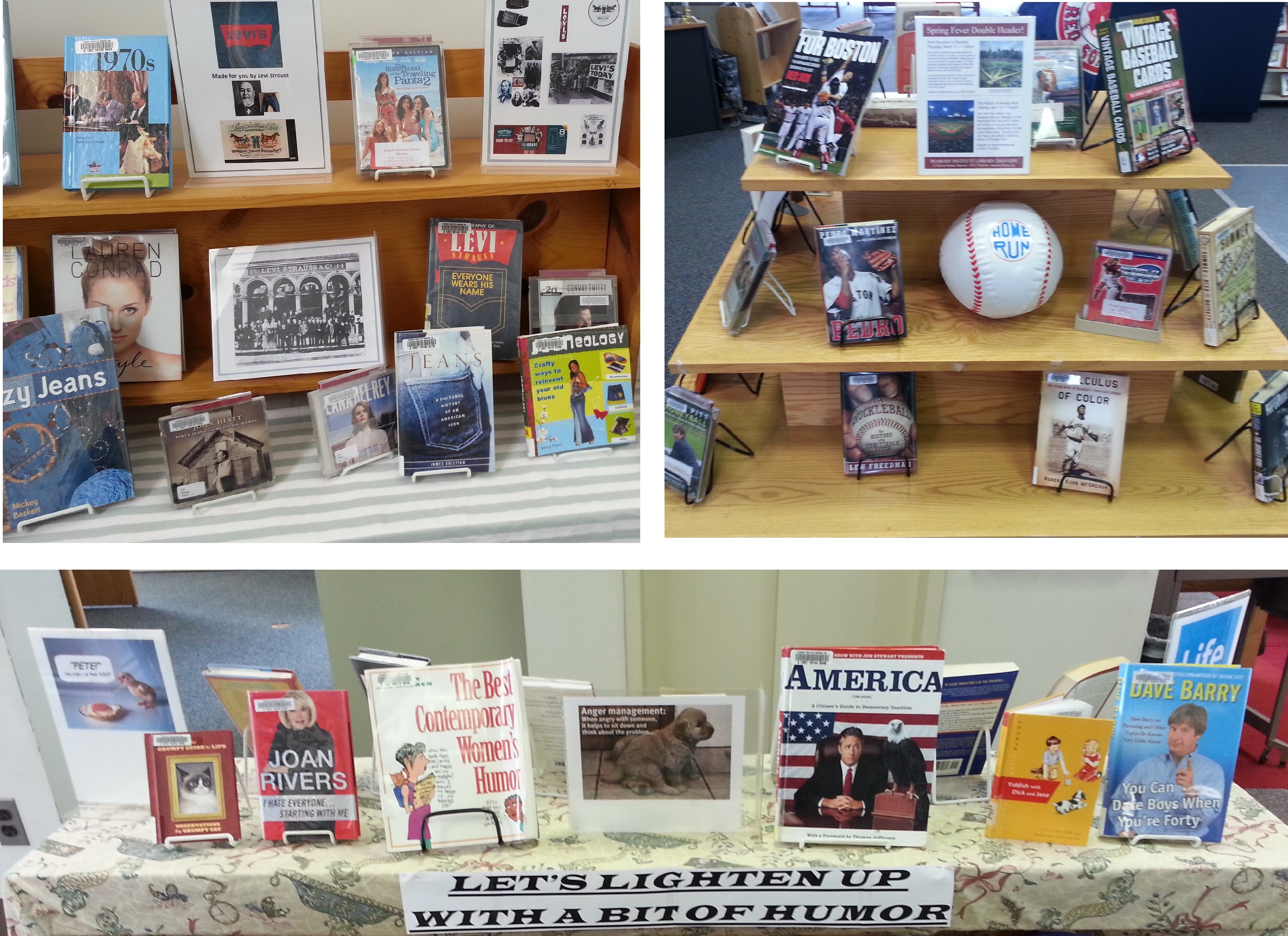 Here is a small sample of the books you will find on display here at the library. All of these are done by members of our staff who put a lot of time and thought into them.

by John Powers and Ron Driscoll

Fenway Park. The name evokes a team and a sport that have become more synonymous with a city’s identity than any stadium or arena in the country. Since opening in the same week of 1912 that the Titanic sank, the park’s instantly recognizable confines have seen some of the most dramatic happenings in baseball history, including Carlton Fisk’s “Is it fair?” home run in the 1975 World Series and Ted Williams’s perfectly scripted long ball in his final at-bat. For 100 years, the Fenway faithful have been tested. They have known triumph and heartbreak, miracles and curses—well, one curse in particular—to such a degree that an entire nation of fans heaved a collective sigh of relief when Dave Roberts stole a base by a fingertip in 2004, triggering the most amazing comeback in the game’s annals. [GoodReads]

The Might Have Been: A Novel by Joseph M. Schuster.

For Edward Everett Yates, split seconds matter: the precise timing of hitting a low outside pitch, of stealing a base, of running down a fly ball. After a decade playing in the minor leagues—years after most of his peers have given up—he’s still patiently waiting for his chance at the majors. Then one day he gets called up to the St. Louis Cardinals, and finally the future he wanted unfolds before him. [GoodReads]

From 2004 to 2011, Terry Francona managed the Boston Red Sox, perhaps the most scrutinized team in all of sports. During that time, every home game was a sellout. Every play, call, word, gesture—on the field and off—was analyzed by thousands. And every decision was either genius, or disastrous. In those eight years, the Red Sox were transformed from a cursed franchise to one of the most successful and profitable in baseball history—only to fall back to last place as soon as Francona was gone. Now, in Francona: The Red Sox Years, the decorated manager opens up for the first time about his tenure in Boston, unspooling the narrative of how this world-class organization reached such incredible highs and dipped to equally incredible lows. But through it all, there was always baseball, that beautiful game of which Francona never lost sight. [GoodReads]

April is humor month and Carol has laid out a fun selection of books to give everyone a laugh. The display even includes a few jokes.

The Grumpy Guide to Life: Observations by Grumpy Cat

In a world filled with inspirational know-it-alls and quotable blowhards, only one figure is indifferent enough to tell the cranky truth: Grumpy Cat. Following the success of her New York Times bestselling debut, everyone’s favorite disgruntled feline is back with this demotivational guide to everyday life, love, friendship, and more. Featuring many new photos of Grumpy Cat’s famous frown and packed with uninspiring observations, The Grumpy Guide to Life will help anyone get in touch with their inner grouch. [GoodReads]

America (The Took): A Citizen’s Guide to Democracy Inaction

Jon Stewart, host of the Emmy and Peabody Award-winning The Daily Show, and his coterie of patriots, deliver a hilarious look at American government. American-style democracy is the world’s most beloved form of government, which explains why so many other nations are eager for us to impose it on them. But what is American democracy? In America (The Book), Jon Stewart and The Daily Show writing staff offer their insights into our unique system of government, dissecting its institutions, explaining its history and processes, and exploring the reasons why concepts like one man, one vote, government by the people, and every vote counts have become such popular urban myths. Topics include: Ancient Rome: The First Republicans; The Founding Fathers: Young, Gifted, and White; The Media: Can it Be Stopped?; and more! [GoodReads]

101 Places Not To See Before You Die by Catherine Price

From the Grover Cleveland Service Area to the Beijing Museum of Tap Water to, of course, Euro Disney, 101 Places Not to See Before You Die brings you lively tales of the most ill-conceived museums, worst theme parks, and grossest Superfund sites that you’ll ever have the pleasure of not visiting. Journalist Catherine Price travels the globe for stories of misadventure to which any seasoned traveler can relate—including guest entries from writers such as Nicholas Kristof, Mary Roach, Michael Pollan, Rebecca Solnit, and A. J. Jacobs—and along the way she discovers that the worst experiences are often the ones we’ll never forget. [From the Back Cover]

Check out Linda’s display for everything Levi Strauss and his eponymous jeans, including a short biography of Strauss.

Wild West chaos and creative problem solving are the force behind a well-loved American institution. What’s a California miner to do when gold dust sifts right out of his holey pockets? With such a raggedy wardrobe, he may as well be mining in the vanilla (that is, his birthday suit)! Good thing Levi Strauss is out west, ready with his needle and a head full of bright ideas. With some quick thinking, quicker stitching, and handy arithmetic, Levi keeps all the gold rushers clothed—and becomes a modern American hero. A Wild West tall tale, Levi Strauss Gets a Bright Idea celebrates creativity, innovation, and the ubiquitous item that fills the closets of grateful jeans wearers worldwide. [GoodReads]

Jeans: A Cultural History of an American Icon by James Sullivan

The story of America’s best-loved garment, from the humble pants Levi Strauss sold to California miners in the 1870s to big-city socialites spending big money—$300 and up—for premium jeans today. Since their emergence over a century and a half ago, blue jeans have been worn by every segment of American society, and exported around the world as a symbol of our civilization. In Jeans, James Sullivan traces the evolution of jeans from a simple utilitarian garment into what fashion critics have called “the American uniform,” the very embodiment of our society’s ethos. [GoodReads]

Just look at the price tag for some designer jeans: they’re over the top! Fortunately, there’s an easy, inexpensive, and fun way to jazz up ordinary denim so it’s practically red-carpet ready: these techniques for distressing, embroidering, beading, painting, sewing, and studding turn jeans, pants, skirts, and vests into one-of-a-kind high fashion. Bleach and batik, add appliqué and lace, adorn with doilies and toile, embellish with ruffles and rhinestones, and give garments a leather monogram, western flare, or rows of shisha sequins. For each cool design idea, be it a swirl skirt or funky flowers on a jacket, there’s basic information and a photo, along with projects and patterns. Or, for something different, transform clothing into fringed bags, pretty pillows, and decorated journal covers.A Selection of the Crafters Choice Book Club [GoodReads]