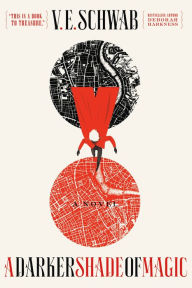 I don’t know how A Darker Shade of Magic got on my radar or really what I was expecting, but it honestly was amazing and had me, like, whipping through chapters.* Schwab – better known for her young adult fiction written under her given name Victoria – weaves early nineteenth-century England with (hard? high?) fantasy into an engaging and engrossing fast-paced piece of world-building. *Ahem* Kell, our fearless ginger-haired protagonist is an Antari – a powerful Traveler magician capable of mastering all five elements** – who officially travels between Londons*** as a diplomat of the Maresh empire of Arnes but also unofficially smuggles artifacts among the three cities until he’s tricked into delivering a letter into Red London (which has an inconspicuous piece of Black London tucked inside (oh hi, plot)). It is here, in a pub in Grey London, with a powerful piece of magic in his shape-shifting coat, that Kell meets our other fearless protagonist: a cross-dressing lady thief named Delilah Bard who is totally kickass and, shall we say, persuades Kell to bring her along with him. Hijinks ensue. (#whew)

A Darker Shade of Magic needs its world-building to succeed: not only because “fantasy [as a genre] tends to live or die on its world-building,” (thank you, Gizmodo) but also because, without it, Schwab’s readers are left scratching their heads in confusion. Why is Kell two-of-a-kind? And why is it so dangerous to have a piece of Black London? And, wait, what’s Black London again? And who is Rhy? And are we supposed to be rooting for Holland or not? And, I’m sorry, but WHAT IS GOING ON??? Schwab writes Lila as both a narrative counterweight to Kell AND a crutch for the reader – she is really freaking successful at building up the foundation that, yes, Magic™ exists but, no, not in the world that also produced the House of Hanover, okay – but it doesn’t feel like we’re being explained to past the first couple of chapters. Magic just is and the Londons just are, and Schwab’s writing is better for it.

The first part in a planned trilogy, A Darker Shade of Magic is part whodunit, part swashbuckling caper, and part coming-of-age. It is not, however, a romance – but that’s okay because Schwab writes such fascinating and faceted characters that the googly eyes most opposite-sex-partnerships make in traditional romances feels over-the-top and, frankly, unwarranted within the world she’s created. (But spoilerly thoughts if you want ‘em.****) The action, although well-paced, felt slightly rushed into its resolution; so, either I was expecting a totally different ending or, well, nope – I was expecting a totally different ending. S’okay, though, as soon as I finished the book’s last page, I was still itching to get my grubby hands on its sequel, A Gathering of Shadows. I think that means Schwab’s foray into adult literature was a success.

* I would set my alarm for thirty minutes and then, like, blink and the alarm would go off… and I would think, “Has it only been a half hour? Wtf is going on???” And then I would set another thirty-minute alarm until it had been, about, three hours. #truestory

** Bone, earth, fire, water, and wind; Kell also has one completely black eye and this amazing coat that he can turn inside out and outside in to reveal different coats when needed.

*** There are four Londons: Black London and White London and Red London (Kell’s London) and then Grey London (our London and the boring one without magic); Magic™ kind of, like, swallowed Black London, though, and nobody goes there anymore or even really mentions it.

**** I kept anticipating a kiss between Kell and Lila simply because they were written as vaguely attracted to one another, but every time a Romantic Moment™ would arrive and Kell and Lila didn’t kiss, I cheered. Don’t get me wrong – I enjoy romance in stories, but it didn’t really feel like either Kell or Lila were ready to be in a romantic relationship, and it makes me so, so happy that Schwab didn’t push it just because we live in a heteronormative world and a nineteen-year-old girl and a twenty-one-year-old boy are “supposed” to end up together. Four for you, V.E. Schwab.