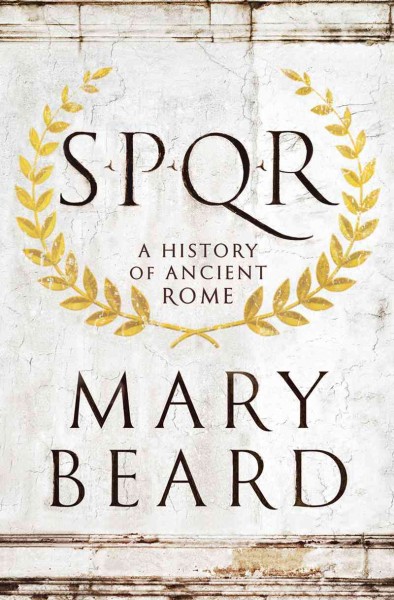 A couple weeks ago a historian friend of mine recommended Mary Beard’s SPQR: A History of Ancient Rome saying “she tells a great story while also showing how hard it is to know anything about Roman history.” I have a pile of books by my bed that threatens to topple over and kill me in my sleep, however I have lots of commuting time so I got it as an audiobooks (sadly we don’t have the audiobook version to check out via Overdrive but we do have the ebook version). My friend was right SPQR is a great story running from the founding of Rome to the reign of Emperor Caracalla (198 CE to 217 CE) It is also an exercise in what we don’t know about ancient Rome. Which is most of it. That is the biggest criticism of the book by reviewers but as far as I’m concerned its is one of its great benefits. One of the things that Beard does really well is pull back the curtain on historical research and show you the ways historians shape the stories they tell.

The other theme is that Roman history was written by the Romans who won. A classic example of this is what is known as the Catiline conspiracy. This is an attempt by a Roman patrician, Lucius Sergius Catilina, to overthrow the Roman government led by then Consul Marcus Tullius Cicero. Catilina’s rebellion is put down very harshly (something that will come back to haunt Cicero). Almost everything we know about Catilina comes from Cicero’s writings on him. As a result Catinine has come down through history as a very unfavorable character.

What’s impressive about this book though is even as Beard is calling into question everything we thought we knew about Roman history she still manages to tell a great story. She also draws as much as possible on the day to day life of Romans to tell the story. As the book progresses into the Imperial period more and more stories of slaves, freeman and merchants creep into the story and the “great” men of Rome start to fade a little into the background.

This is a great book for anyone into Roman history. But not so much if you are expecting hard and fast conclusions. Even so the story is excellent and the writing is very approachable.  Another bonus, if you are listening to it as an audio book, the narrator, Phyllida Nash, sounds (to me at least) a bit like Judy Dench.