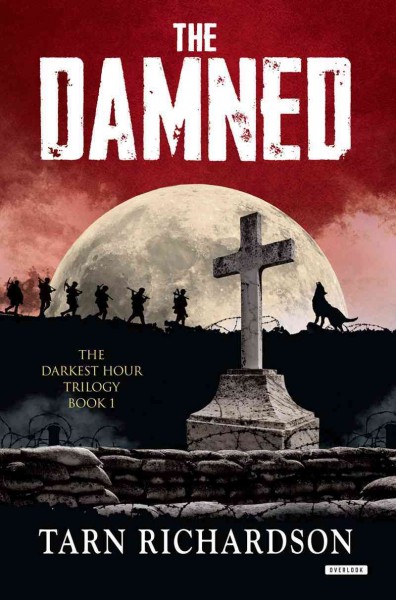 Richardson’s The Damned, first book in the Darkest Hour Trilogy, (it sometimes appears as the Darkest Hand Trilogy) is a fascinating combination of alternate history, church murder mystery, and horror thriller all wrapped up in a nice dark fiction package.

The book opens in the trenches east of Arras in the opening days of an alternate World War I. Although you won’t notice it to begin with because Richardson sticks pretty closely to the original history of the war. What is alternate then you may ask? Well there’s something very nasty stalking no man’s land and Lieutenant Henry Frost is going to find out what it is thanks to the mysterious French woman, Sandrine. This part of the book is populated with

Hiding in the shadows behind the war, and the rest of the world for that matter, is a very powerful Catholic Church which takes its domination very very seriously. In the city of Arras a priest is brutally murdered and the Inquisitor, Poldeck Tacit is brought in to investigate. In this world an Inquisitor is a little different than in our world. They are the foot soldiers of the Church, tasked to hunt down and destroy any threat to the church. And those are some pretty dangerous threats: heretics, demons, witches and much worse. They are fanatical and a little crazy. Poldeck is considered mad even by their standard. So when he arrives on the scene he gets some push back from, well pretty much everyone. Including his ad hoc sidekick, Sister Isabelle. Who is probably unlike any nun you’ve ever met.

These two threads, the murder and what’s going on at the front, are intertwined with Tacit’s back story. Chapters dedicated to the murder investigation and the life in the trenches are interspersed with flashbacks to Tacit’s life as a new initiate into the church bureaucracy and his growth into an Inquisitor and his growing madness.

There’s a lot to love about this book. The war at the front is filled with horror but is also shot through with dark humor. The machinations of the various church officials creates an air of mystery and an engrossing complexity that grabs the readers attention. Tacit is, not surprisingly, an anti-hero and you would come to loath him except for the flashbacks. Those follow his growth and make him a much more sympathetic character. The reader watches him grow into the Inquisitor in the opening chapters and by the end your heart bleeds for him. On a deeper level Richardson also plays with the idea of what it means to be a monster which is fascinating in the context of World War I.

Here is a excellent interview with Richardson on the creation of The Damned.