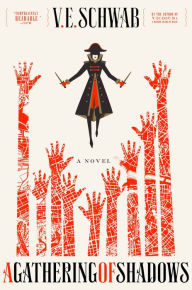 It has been four months since a mysterious obsidian stone fell into Kell’s possession. Four months since his path crossed with Delilah Bard. Four months since Prince Rhy was wounded, and since the nefarious Dane twins of White London fell, and four months since the stone was cast with Holland’s dying body through the rift – back into Black London. As Red London finalizes preparations for the Element Games – an extravagant international competition of magic meant to entertain and keep healthy the ties between neighboring countries – a certain pirate ship draws closer, carrying old friends back into port. And while Red London is caught up in the pageantry and thrills of the Games, another London is coming back to life. After all, a shadow that was gone in the night will reappear in the morning. But the balance of magic is ever perilous, and for one city to flourish, another London must fall.

By all accounts, V.E. Schwab’s A Gathering of Shadows is a standard middle-book. It wraps up loose ends from its series opener, A Darker Shade of Magic; it advances the plot and world building of the series’ nineteenth-century historical fantasy setting; and it teases clues for the third Shades of Magic book, A Conjuring of Light. And I liked it – I did (there’s no waffling on that front); I just wish that maybe I had known a third book was coming before I dove into the first. (I can’t take the wait!!!!!)

Instead of further exploring the setting she’s created, Schwab focuses A Gathering of Shadows on the Element Games – a tri-state tournament for practicing magicians – and relies heavily on this B plot to move the story forward. There are flashbacks to what happened in between the ending of A Darker Shade of Magic and the beginning of A Gathering of Shadows four months later, but Schwab forces most of the conflict from the secrets our protagonists keep from both one another and the rest of the ensemble cast. For instance, fearless lady pirate Delilah Bard keeps her true identity from her ship’s captain, Alucard Emery; Alucard keeps his lineage a secret from most of his crew and the source of Kell’s animosity toward him from the reader; and Kell keeps his entrance into the Element Games a secret from everyone but his brother, Rhy. And, well, there’s also the secret of what the heck happened to that piece of black magic Kell threw into Black London, hidden from both the reader and everyone in the book. (And I’ll just leave it at that, because, well, as River Song would say, “Spoilers!”[1])

I found three spelling mistakes in the hardcover edition, released in February 2016, and that makes me wonder if Schwab is perhaps rushing in order to make a late winter/early spring release date for all three novels. (You can basically chart the progress on the book’s Goodreads “Community Reviews” section and then go fangirl on her Tumblr.) Schwab is a strong writer and effectively paced A Darker Shade of Magic and A Gathering of Shadows to both warrant a 450 average page count and keep her readers feverishly flipping through, but the first two parts of her Shades of Magic trilogy are strengthened by getting to binge both titles one after the other. Sure, I can read synopses of the two when A Conjuring of Light finally drops sometime next year – fingers crossed – but what I’ll really want to do is start from the first page of the first novel and go all the way through to the last page of the last novel. Schwab’s novels deserve that kind of commitment.

[1] Remember how I said I didn’t want Kell and Lila to end up together? Well… now I do.