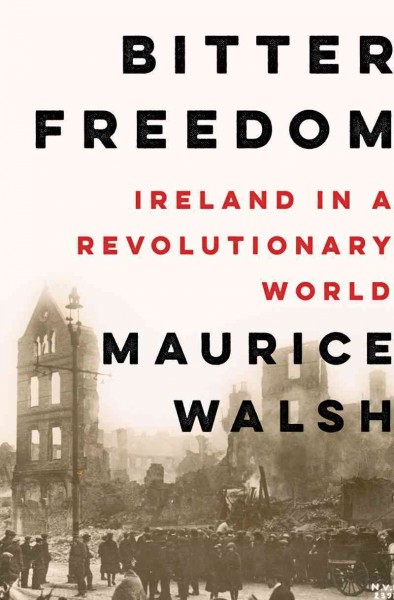 This year marks the 100th anniversary of the the Easter Rising, the event commonly seen as the kick off of the Irish Revolution. The revolution, lasting from 1916 to 1923, included the failed rising, the Anglo-Irish war and the Irish Civil War, and along the way resulted in the creation of the Irish Free State. There has unsurprisingly been a lot written in the past couple of years on these events. What caught my attention about Bitter Freedom was the subtitle: “Ireland in the Revolutionary World.”

Most books on this period focus on the history that led to those events. Protestant vs Catholic, Irish nationalism vs British Empire, Irish nationalist moderates vs Irish nationalist radicals, just to name a few examples. What Walsh does, though, is look at this period as a world wide event that Ireland was part of. The end of World War I brought seismic change to empires across the globe. The obvious examples are Germany, Austria and Russia. However there were others. England dealt with a revolt in Egypt and the rise of Indian nationalism on the subcontinent.

Walsh argues that Ireland was part of that world wide movement. He constantly draws connections between events in Ireland and events in other parts of the world. For example, the Irish nationalists really latched on to the concept of national self-determination as expounded by Woodrow Wilson at the Versailles peace conference as a justification for their own freedom. A fact that America’s erstwhile ally, England, found most embarrassing. One of the reasons England came down so hard on Ireland after World War I was a fear that Irish independence would cause a domino effect that would unravel the whole empire.

Along with this interesting argument, Walsh brings an engaging narrative writing style. The story just doesn’t focus on the larger issues, but drills down to the daily lives of people. The reader gets the fascinating–in a car wreck kind of way–reasoning of General Sir John French’s policy towards Ireland during and after World War I. But there are also stories like that of Rosamond Jacob, whose two great passions were movies and Irish nationalism. She though Charlie Chaplin was delicious, and got into a heated debate with Irish revolutionary (and eventually Irish president) Eamon De Valera over not discussing woman in his speeches. In short, it is a fascinating book that is a pleasure to read.