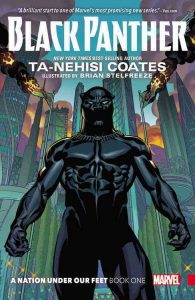 So… I really wanted to like this. After loving Chadwick Boseman’s portrayal of T-Challa in Captain America: Civil War and Ta-Nehisi Coates’s memoir Between the World and Me, my senses prickled at the thought of two amazing things coming together. Except A Nation Under Our Feet, Book One is better suited to readers who are already Black Panther fans instead of people like me who a) don’t read comics and b) are big fans of the Marvel Cinematic Universe. Coates includes some backstory, but A Nation Under Our Feet basically just drops you into a plot and characters that are both unfamiliar and overwhelming. In a movie, it’s okay for a side character to be quickly introduced and then thrown into the main conflict with either little or no explanation. But in a comic where that character is now the main star, that sort of “roll with it” mindset no longer works. I’m sure that, with a little Wikipedia digging and notes, I would have made it through A Nation Under Our Feet just fine – but Coates should have done that work for me.