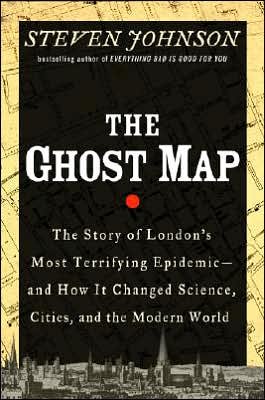 You might be surprised to know that throughout much of the 19th century Europe and the United States were overrun by a series of pandemics that killed thousands. The disease was Cholera, which is cause by a bacteria that essentially causes its sufferer to discharge all the fluid in their body over the course of several days until dehydration kills them. We know today that it is spread by contaminated drinking water and that proper sanitation will prevent it, and if it is contracted that essentially pumping the sufferer full of fluids will cure them. But in the 19th century none of that was known. Which is where Johnson’s Ghost Map comes in: It is the story of a particularly vicious outbreak of Cholera in the relatively small Soho district of London in 1855.

London of the 1850s was, as Johnson points out, a really disgusting place. There was no proper sewage and waste pilled up in, and often overflowed, cesspool. The system for distributing drinking water through the city was run by a hodge podge of companies through varying quality infrastructure. Add to this the huge expansion of London’s population; London was a city of 2.5 million people, with the infrastructure of a village.

These are perfect conditions for Cholera and London was wracked with dozens of outbreaks over the 19th century. What was special about the one in Soho in 1855 was the viciousness of the outbreak: 127 people died in the first three days, and it’s the one where they start to figure out how the disease spread. Up to that point it was assumed “bad air” caused the spread of Cholera. A local physician, John Snow, by tracking the cases is able to find the real culprit of the disease.

The book is a very easy read. Johnson does a great job of explaining the realities of life in 19th century London. Not surprisingly he spends a lot of time on waste disposal, or lack thereof, so I wouldn’t read this one while eating. The thing I found most interesting is how John Snow, who knows nothing about the Cholera bacteria (germ theory is still a couple decades away), still manages to figure out what the vector is for the disease. One place where I do think the book falls down is when he tries to explain the forces that brought so many people to London. He spends pages and pages on sanitation in London, but only a couple on the forces that turned London from a large village into a giant city. I think that would have given context to the overall story. Great book for anyone interested in Dickensian London or medical history.