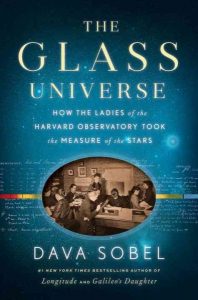 The full title of Sobel’s latest is The Glass Universe: How the Ladies of the Harvard Observatory Took the Measure of the Stars. What the book contains is what it says on the tin, mostly. I would add emphasis to one word in the subtitle: How. I would de-emphasize another: Ladies.

Based on the title and publisher provided summary, I carried a certain expectation into the book, primarily that it would offer an introduction to the women employed by the Harvard Observatory at the end of the nineteenth century, and then extend an invitation to step deeper into the spaces of their lives, both at work and at home. I imagined this book would be their stories told, these women who made impactful astronomical discoveries and worked as tireless computers and observers of the stars, in a narrative manner similar to Nathalia Holt’s in Rise of the Rocket Girls, an excellent and tightly focused look at the women who helped make the JPL what it is today.

My expectation was not met. Roughly seventy pages in I wondered where the ladies were. And then I wondered if Edward Pickering, Director of the Harvard Observatory, in whose company I had spent many (many) paragraphs, was in actuality the book’s first and foremost priority. Don’t get me wrong: Pickering seemed a nice enough guy, he bucked the trend that would see women denied employment in esteemed institutions such as Harvard. He gave credit where it was due, regardless of gender. In general terms, Pickering challenged the ethos of the era. According to the subtitle (and summary) this book is not about him.

Neither is it about William Pickering, nor Solon Bailey, nor Simon Newcomb, nor George Ellery Hale, nor Percival Lowell, nor nor nor.

A great number of men in the field are mentioned or expounded upon; was their inclusion necessary to put the work in context? A case could be made for it, yes. Do they need to intrude upon the women’s achievements so often and to such an extent? If the answer to that question is also yes than perhaps the marketing of the book should have taken a different tack. The LADIES of the subtitle could very well be there for the sole purpose of hooking readers already caught up in the fever for books with a similar spotlight on women in STEM fields: Holt’s book, Shetterly’s Hidden Figures, Morgan’s Rocket Girl, and even to some extent, Jahren’s Lab Girl.

It wasn’t until I approached the one hundred page mark that one of the women, Mrs. Fleming, was given several consecutive paragraphs of actual life-related detail: She twice fell into the clutches of the grippe, and her diary indicated that she took umbrage with her boss, E. Pickering, for failing to recognize that the magnitude of her work and responsibilities was worth more than her allotted salary. Especially in light of the fact that male assistants doing similar work were paid decidedly more. But then, within that same chapter, we are reunited with Solon Bailey, returned from Peru with his family. Frankly, I wanted to know more about Fleming’s role as head of household, in total control of her family’s finances and so on.

There is a considerable amount of interesting information to be found here. Topics covered include spectroscopy, photometry and the early use of photographic plates to document star position, and the systems put in place to determine the brightness of the stars and their composition. Other noteworthy mentions include the pursuit of Mars and the first sighting of Pluto. The way the information was presented grew tedious, I thought, but that might have been my expectation of a more narrative form getting in the way.

Whether or not you’ll enjoy this book really depends on what you want from it. If what you’re after is the science of the stars or a general history of the Harvard Observatory, you’ll likely have few qualms with what you find here. But if you want to know more about the ladies who were instrumental in making the Harvard Observatory’s reputation a stellar one at the end of the nineteenth century, perhaps be prepared to be letdown.