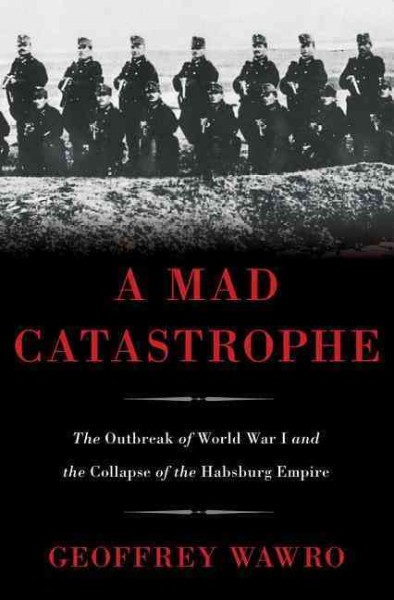 With the hundredth anniversary of World War I there has been a lot of discussion of “who’s fault was it?” Classically German gets the most of the blame but Russian and France and even England have gotten their share as well. Now Wawro has turned the eye of blame on the Austro-Hungarian empire in A Mad Catastrophe which covers the first year and a half of the war on the southeastern front.

The Austro-Hungarian empire was created in 1867 after Austria lost the Austro-Prussian war and along with it most of its claim to being the dominant German speaking political power. To find off collapse Austrians made a deal with the Magyars of Hungary to create a multi-national state with two kingdoms: Austria and Hungary and the autonomous region called the Kingdom of Croatia-Slavonia. All these kingdoms were ruled by a largely ineffectual Emperor from the House of Habsburg. A country of multiple ethic groups it was throughout the early 20th century being torn apart by ethnic tensions.

Wawro makes the argument that because of these ethnic tensions combined with a weak leadership made it that starting point for the war. This same weakness also made it a disaster on the battlefield drawing resources away from Germany and helping to create the deadlock that the war became. Wawro stresses the near criminal stupidity of the Austrian generals to the point that he has to also explain why the did not just fall apart completely but still managed to limp through four years of war. Namely the Russians were just as disorganized as the Austrians were.

This book is interesting in the sense that the reader gets to see the Austrians at war. Something that many books on the war don’t cover. At the same time it is a hard slog keeping track of all the backing and forthing of all the armies. Also trying to lay the blame for such a massive war at the feet of a single participant seems a bit of a waste of time to me. This is a book for the military history buff or more specifically the World War I history buff.