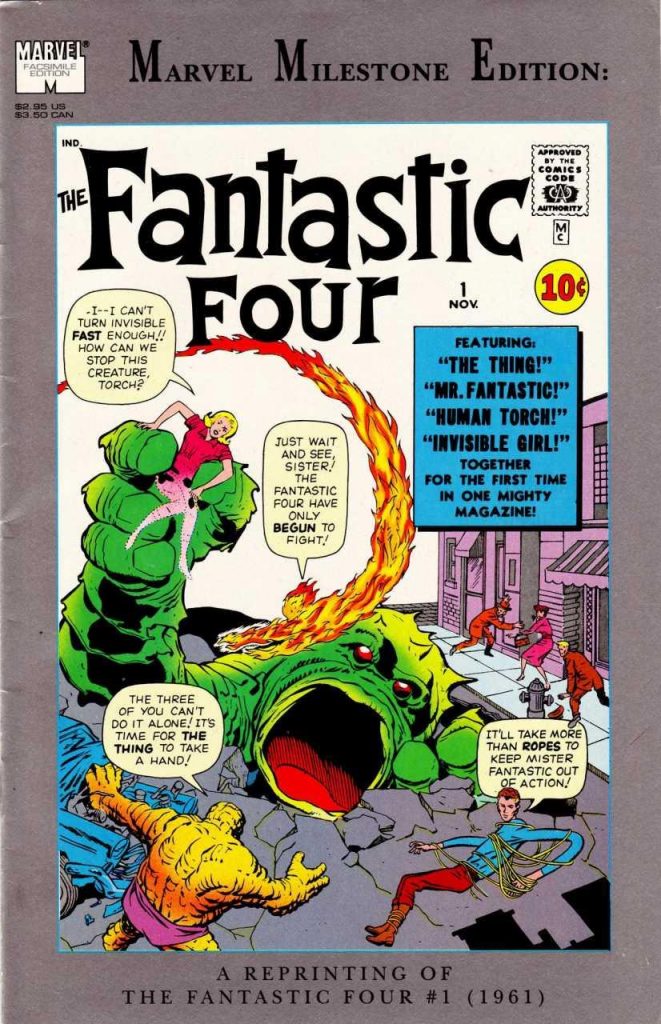 In 1961 the talents of Jack Kirby and Stan Lee brought forth an unusual group of superheroes. A quartet of adventurers mutated by cosmic radiation. This fantastic foursome would in turn help transform a struggling Marvel Comics into a multimedia powerhouse. The Fantastic Four shared aspects with another comic Kirby had worked on a few years prior, The Challengers of the Unknown. This would be the basis for arguments years later regarding creative credit. Like other titles Stan Lee was involved with there was considerable disagreement over creative credit. 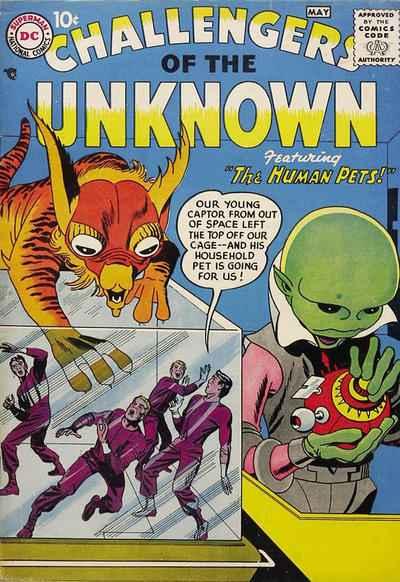 While the Fantastic Four has been re-booted, and re-imagined over the years, the origin story remains more or less the same. Doctor Reed Richards constructs an experimental spacecraft, and launches an expedition into outer space. While it makes sense that Richards would bring a pilot on the mission, his decision to bring his fiancé and her brother is somewhat questionable. The four are exposed to cosmic rays, granting them extraordinary abilities. Richards gains the ability to stretch and manipulate his body. His fiancé Sue Storm can become invisible at will. While her brother Johnny can control and manipulate fire. Allowing him to set himself ablaze and fly. Benjamin Grimm, the pilot was transformed into a hulking, armored Thing with superhuman strength and resilience. The Thing acted as an alter Ego of Kirby, sharing many of Jacks’ quirks and mannerisms. 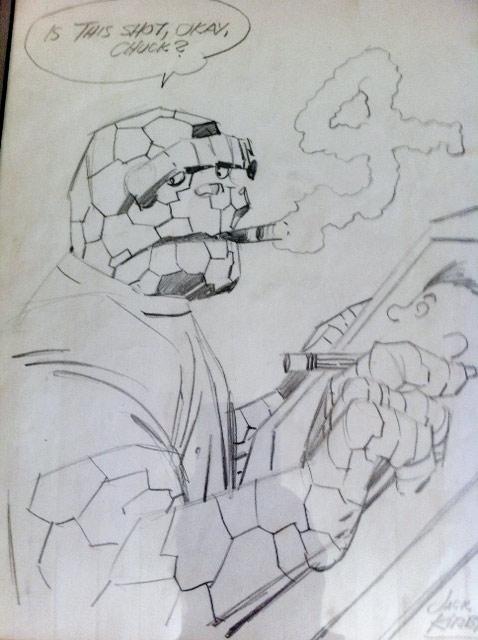 Unlike other superhero groups like the Justice League, the Fantastic Four was not universally beloved. Their powers set them apart from humanity. Ben Grimm felt this estrangement keenly, with his rocky exterior Ben could never pass for human. A number of their adventures revolve around finding a cure for his condition. 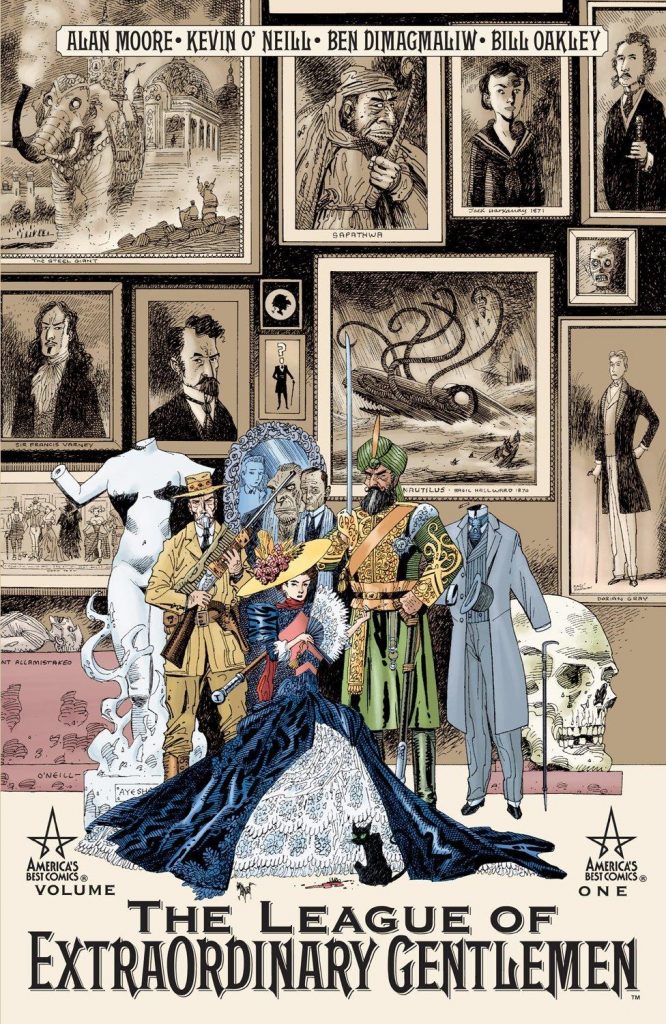 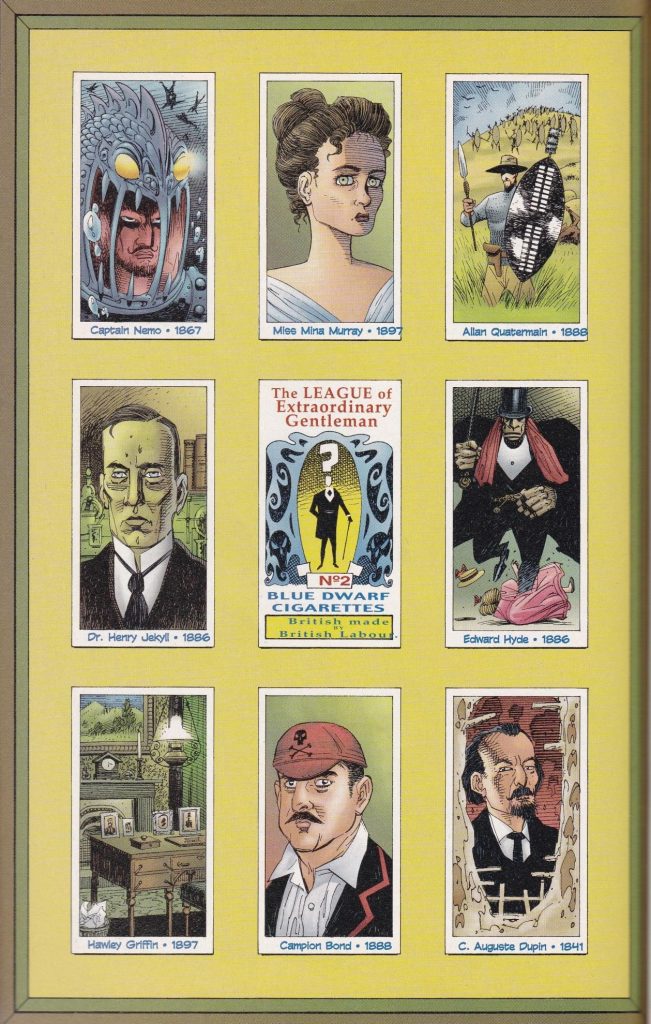 While the first group contains five members, or six depending on point of view, the connection to the Fantastic Four is based on their shared status as outcasts. As a covert military group containing known criminals the League is also similar to DC’s Suicide Squad.

For those looking for additional primary sources on The League of Extraordinary Gentlemen and Alan Moore, the Peabody Institute of Danvers has the e-book “Alan Moore, Conversation” available online to Danvers residents. Non-residents can access this e-book on the many public computers available to the Peabody Institute of Danvers, or through our public wifi. 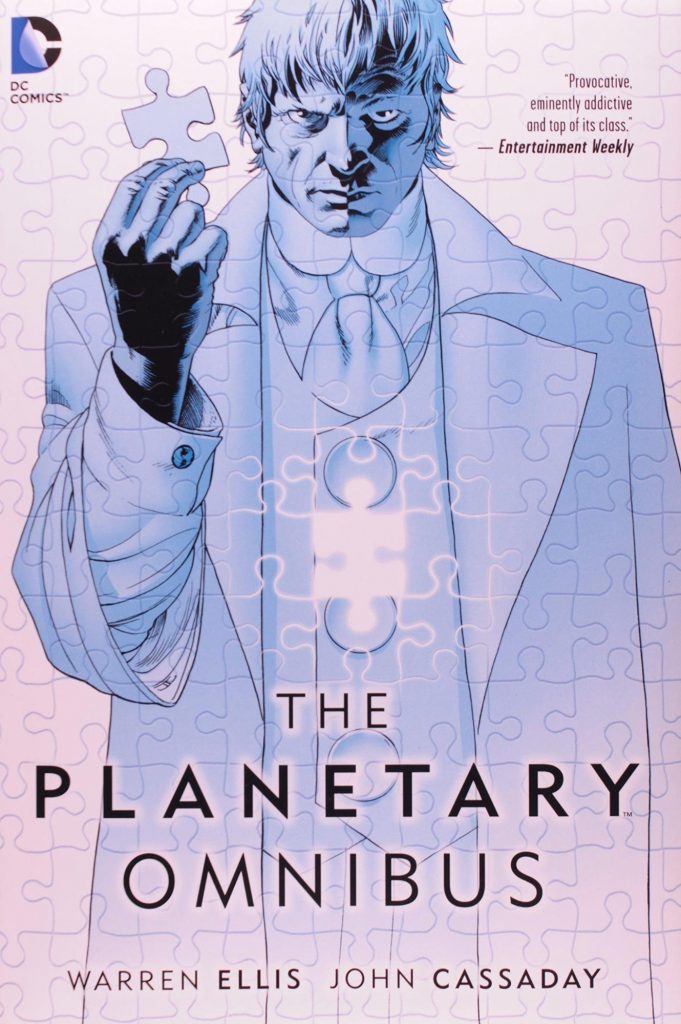 Planetary can be summed up with the signature phrase: “It’s a strange world. Let’s keep it that way.” The series is part of the Wildstorm universe, a world modeled on the DC and Marvel comic continuities. Wildstorm and The Authority are the superhero titles. Planetary is more investigative in nature, being an organization of mystery archeologists dedicated to uncovering the hidden history of the world. They are opposed by a group known only as The Four, post humans who resemble Kirby’s Fantastic Four. 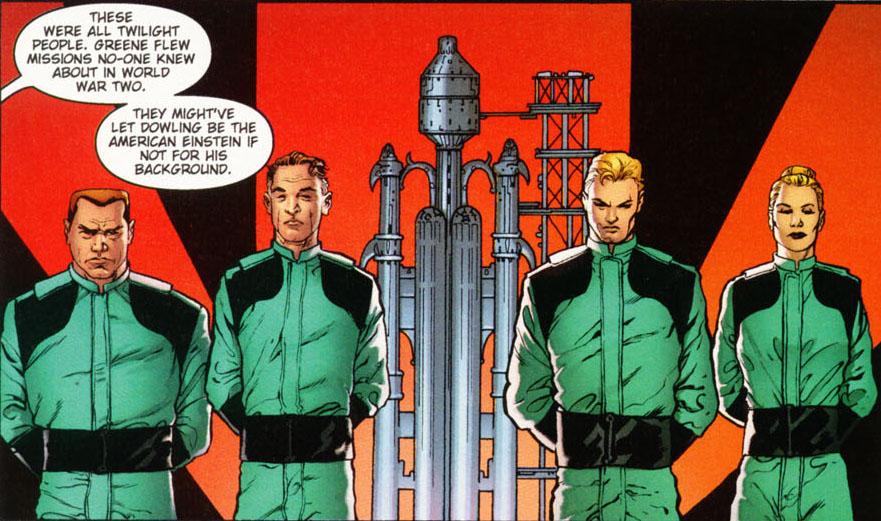 This villainous quartet acts as a dark version of the Fantastic Four, using their abilities to accumulate power, and hoard the secrets Planetary is seeking to uncover. In exchange for their extra-normal abilities the Four have promised to subjugate humankind for a parallel earth of paranoid and power-hungry super beings. Ellis further cements the Kirby connection by molding this alternate earth on the planet Apokolips from DC’s New Gods series. 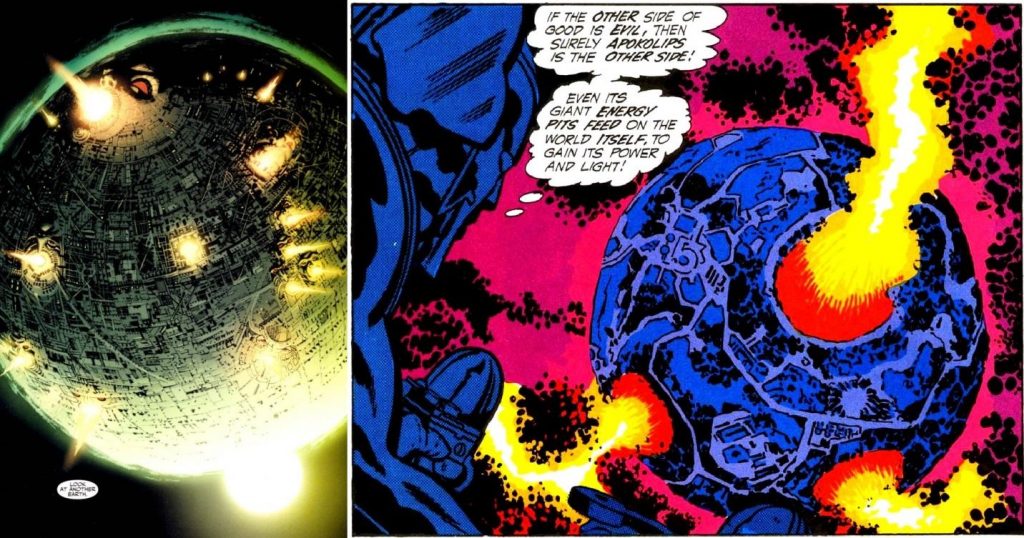 Since Planetary deals with multi-dimensional theory, The Planetary Omnibus includes a series of stories starring members of the Justice League. Including a one where Planetary acts as the antagonists.

Like the dreaded Four from Planetary, Adult Swim’s 2004 hit the Venture Brothers presents a different take on the Fantastic Four. The series revolves around the misadventures of Doctor Venture, his bodyguard Brock Sampson, and his two boys Hank and Dean. Just as The League of Extraordinary Gentlemen is an homage to 19th century fiction, the Venture Bros. a tribute to cartoons, comic books, and pop-culture. 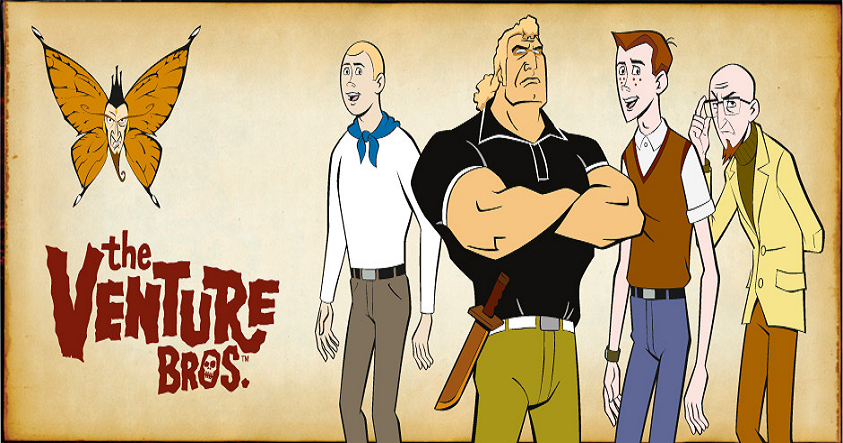 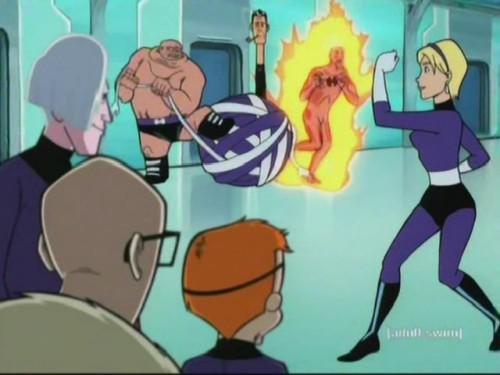 The Venture Bros. television series is available through interlibrary loan. 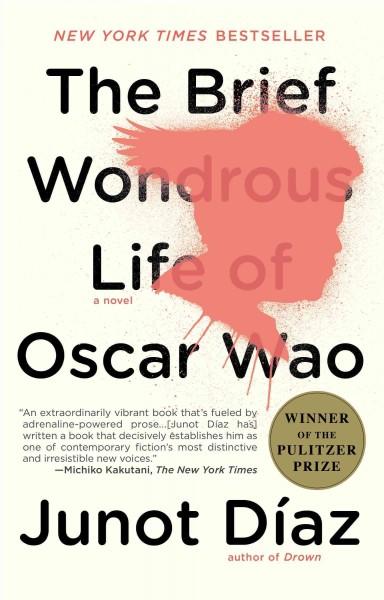 To fully understand The Brief Wondrous Life of Oscar Wao, you not only have to be versed in Dominican culture and history, but geek pop culture as well. This pop culture subtext within Junot’s novel provides a unique look at the brutal Trujillo regime. Comparing his brutal rein to a version of The Lord of the Rings where Sauron won. Through the numerous pop-culture references combined with a focus on family history, Díaz shifts the historical narrative from the victimizers to the victimized. By equating

The connection to the Fantastic Four is through Oscar and his family. With his unattractive appearance Oscar is the Thing. His sister Lola with her fiery and rebellious nature resembles the Human Torch. Albelard, their self-sacrificing father corresponds to Mr. Fantastic, while his wife Beli is the invisible woman. In addition there is Oscar’s friend Yunior who is often compared to the Watcher.

The Brief Wondrous Life of Oscar Wao is available at the Peabody Institute of Danvers, or through interlibrary loan. An e-book and e-audio book are available to Danvers residents through Overdrive. Non-residents can access these through our many public computers, or via our public wi-fi.