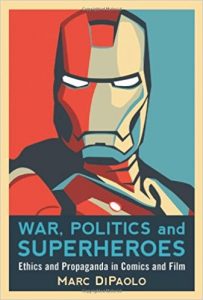 One of my main interests is how pop-culture impacts and reflects the society in which it is produced. While some might devalue comic books and cartoons as juvenile literature, they can be complex, and give a greater insight into the public mindset. Marc DiPaolo’s book War, Politics and Superheroes: Ethics and Propaganda in Comics and Film tackles this issue. With an eye on how times of strife influence pop-culture, particularly the terrorist attacks of September 11th 2001, and the subsequent wars in the Middle East. DiPaolo is concerned about how popular culture at the time may have contributed to U.S. policy decisions at that time. Just as movies, television and other media act as a mirror; they also act as lens, altering public perception.

The basis for DiPaolo’s analytical lens is What is Art?, a lengthy essay written by Leo Tolstoy. In his treatise Tolstoy postulates that good art acts as an inclusive force that encourages the acceptance of other people and cultures. Bad art is divisive, creating a siege mentality. DiaPaolo breaks this down into a series of categories, in which he uses to determine the worth and direction of a text. This is applied to a variety of pop-culture franchises, from Batman to Doctor Who. While I do not always see eye to with DiPaolo, War, Politics and Superheroes is a fascinating read. It has given me greater insight into my favorite cartoon, film, and comic book characters. The book is an excellent secondary source for those looking to tackle the subject of pop-culture.

Marc DiPaolo is an associate professor of English and Film at Oklahoma City University. His book War, Politics and Superheroes: Ethics and Propaganda in Comics and Film is available through interlibrary loan.