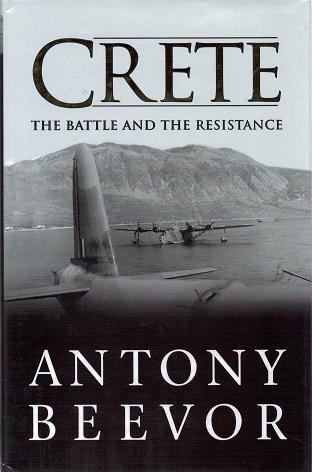 I can actually remember the first time I heard about the Battle of Crete, albeit obliquely. I was a kid watching the old 60s Gregory Peck, David Niven and Anthony Quinn movie Guns of Navarone. Peck’s character Mallory’s major credential as a special operations soldier is the fact that he is a mountaineer and survived on Crete for over a year. Not knowing anything about Crete, that line always struck me as odd. What was the big deal about Crete? Well Anthony Beevor’s Crete: The Battle and Resistance answer’s that question. We don’t own it but would be happy to get a copy for you.

A riveting account of the fall of Greece, the Battle of Crete, and the Cretan Resistance, from the beginning of World War II to its end. Nazi Germany expected its airborne attack on Crete in 1941 to be a textbook victory based on tactical surprise. Little did they know that the British, using Ultra intercepts, had already laid a careful trap. It should have been the first German defeat of the war when a fatal misunderstanding turned the battle around. Prize-winning historian and bestselling author Antony Beevor lends his gift for storytelling to this important conflict, showing not only how the situation turned bad for Allied forces, but also how ferocious Cretan freedom fighters mounted a heroic resistance. Originally published in 1991, Crete 1941 is a breathtaking account of a momentous battle of World War II.

And in case you are feeling nostalgic for Guns of Navarone here’s the trailer for it too: