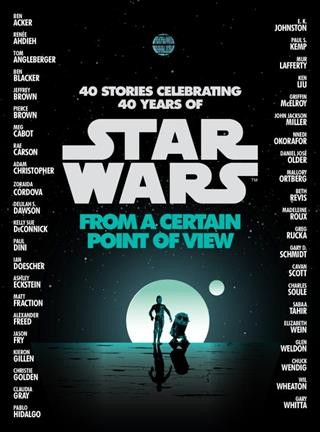 Yeah it’s been 40 years since A New Hope premiered in movie theaters! I can’t believe it, either. But I am digressing from my digression. I discovered this book while listening to a podcast called Pop Culture Happy Hour hosted by Linda Holmes. For those of you who aren’t already fans, this show, as the name implies, covers all things pop culture. I listen mostly to keep abreast of movies, tv shows, music, etc., that I will probably never consume but want to know about all the same. One of the features of the show is “What’s Making Me Happy” where all the cast members go around and talk about something that is making them happy that week. Glen Weldon, a regular on the show and one of the contributing authors, mentioned From A Certain Point of View, and I thought, “I must have it!”

The premise behind From A Certain Point of View (a riff on Obi Wan Kanobi’s favorite saying) is 40 short stories written from the perspective of secondary characters in the New Hope arc. There are stories from the point of view of the Jawas, the Sand People, an IT worker on Darth Vader’s star destroyer, even the poor Imperial admiral who gets force-choked by Vader. They are written in a variety of styles: some humorous, some serious, and some somewhere in between. The stories themselves follow the action of the movie, so even as you read about the lives of the secondary characters, you are aware of the action of the movie that’s going on in the background.

As with all collections of short stories, I liked some better than others. As a lover of stories, the story about the little Jawa whose job it is to wipe the memories of the droids picked up by their Sandcrawler and in turn gets caught up in the “stories” those memories hold really stuck with me. Whereas I kind of shrugged at the story of the red droid that metaphorically throws himself on his sword so that R2 D2 can continue his mission. But that is the great thing about short stories: There is always something there for you, and if you don’t find it in one story you might find it in another. Also with the premiere of The Last Jedi eminent, if you are feeling like some Star Wars reading that isn’t going be a big time commitment this is a great book for you.