Wuthering Heights was a tough read for this cynophilist, and I’ve often wondered if I would have enjoyed it more had the dogs in the book not suffered a cruel fate. To this day, having read the book years upon years ago, what sticks in memory most tenaciously is wrapped around dogs – and that Heathcliff was a…well, let’s just call him a jerk, shall we?

Since that first meeting with Catherine and Heathcliff, I’ve read a fair amount about their creator, some of it focused on the threads of Brontë’s own life that she took and wove into those characters, into creating a lasting legacy for her beloved moors, and that insight has made me reconsider my stance on re-reading Wuthering. I just might have to…One of these days.

Despite the uneven ground I found myself on while spending time with her novel, I am a fan of Emily, herself, who preferred the solitary stretch of landscape outside her father’s parsonage to social ties and the suffocating expectations placed upon her gender at that time. I am a fan of her poetry, and the journal sketches that thankfully survived her (one of which you saw prior to clicking over to this post). If you would like to dip into Emily’s life and work, consider checking out one of the books listed below. 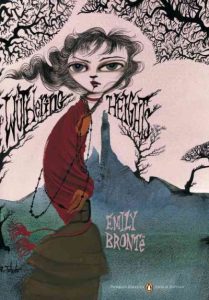 “Lockwood, the new tenant of Thrushcross Grange, situated on the bleak Yorkshire moors, is forced to seek shelter one night at Wuthering Heights, the home of his landlord. There he discovers the history of the tempestuous events that took place years before. What unfolds is the tale of the intense love between the gypsy foundling Heathcliff and Catherine Earnshaw. Catherine, forced to choose between passionate, tortured Heathcliff and gentle, well-bred Edgar Linton, surrendered to the expectations of her class. As Heathcliff’s bitterness and vengeance at his betrayal is visited upon the next generation, their innocent heirs must struggle to escape the legacy of the past.”

The Poems of Emily Bronte

“This new edition of Emily Bronte’s poetry contains all those poems which she herself chose to keep. It is based on the texts of the three notebooks into which she transcribed her poems supplemented by others on single sheets scattered in various collections, and the versions published in Poems by Currer, Ellis and Acton Bell and in Charlotte’s 1850 edition of the novels. Variants between the Notebooks and the latter are listed in the Notes. The majority of the poems stand without need of explanation. However, it is helpful to be aware of the context in which they were written, and especially their relationship to the imaginary world of “gondal” shared by Emily and Anne.” 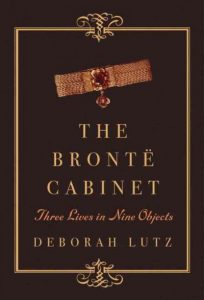 “In this unique and lovingly detailed biography of a literary family that has enthralled readers for nearly two centuries, Victorian literature scholar Deborah Lutz illuminates the complex and fascinating lives of the Brontës through the things they wore, stitched, wrote on, and inscribed. By unfolding the histories of the meaningful objects in their family home in Haworth, Lutz immerses readers in a nuanced re-creation of the sisters’ daily lives while moving us chronologically forward through the major biographical events: the death of their mother and two sisters, the imaginary kingdoms of their childhood writing, their time as governesses, and their determined efforts to make a mark on the literary world.

From the miniature books they made as children to the blackthorn walking sticks they carried on solitary hikes on the moors, each personal possession opens a window onto the sisters’ world, their beloved fiction, and the Victorian era. A description of the brass collar worn by Emily’s bull mastiff, Keeper, leads to a series of entertaining anecdotes about the influence of the family’s dogs on their writing and about the relationship of Victorians to their pets in general. The sisters’ portable writing desks prove to have played a crucial role in their writing lives: it was Charlotte’s snooping in Emily’s desk that led to the sisters’ first publication in print, followed later by the publication of Jane Eyre and Wuthering Heights.

Charlotte’s letters provide insight into her relationships, both innocent and illicit, including her relationship with the older professor to whom she wrote passionately. And the bracelet Charlotte had made of Anne and Emily’s intertwined hair bears witness to her profound grief after their deaths.” 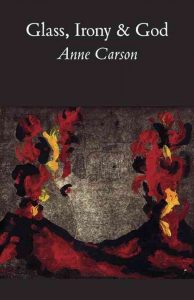 “Known as a remarkable classicist, Anne Carson weaves contemporary and ancient poetic strands with stunning style in Glass, Irony and God. This collection includes: “The Glass Essay,” a powerful poem about the end of a love affair, told in the context of Carson’s reading of the Brontë sisters; “Book of Isaiah,” a poem evoking the deeply primitive feel of ancient Judaism; and “The Fall of Rome,” about her trip to “find” Rome and her struggle to overcome feelings of a terrible alienation there.”

The Brontes at Haworth: The World Within – Juliet Gardiner

“The Brontes at Haworth is the story both of the real world of the Brontes at Haworth Parsonage, their home on the edge of the lonely Yorkshire moors, and of the imaginary worlds they spun for themselves in their novels and poetry. Wherever possible, their story is told using their own words – the letters they wrote to each other, Emily and Anne’s secret diaries, and Emily’s exchanges with the luminaries of literary England – or those of the people who were closest to them – their brother Branwell, their father the Reverend Patrick Bronte, and their novelist friend Mrs. Gaskell.

The Brontes sketched and painted their worlds too, in delicate ink washes and watercolors of family and friends, animals, and the English moors. These pictures illuminate the text, as do the tiny drawings the Bronte children made to illustrate their imaginary worlds. In addition, there are facsimiles of their letters and diaries, paintings by artists of the day, and pictures of period household items.” 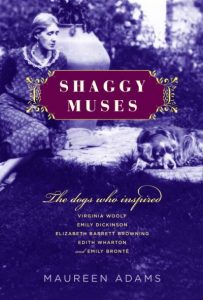 “In Shaggy Muses, we visit Elizabeth Barrett Browning and Flush, the golden Cocker Spaniel who danced the poet away from death, back to life and human love. We roam the wild Yorkshire moors with Emily Brontë, whose fierce Mastiff mix, Keeper, provided a safe and loving outlet for the writer’s equally fierce spirit. We enter the creative sanctum of Emily Dickinson, which she shared only with Carlo, the gentle, giant Newfoundland who soothed her emotional terrors. We mingle with Edith Wharton, whose ever-faithful Pekes warmed her lonely heart during her restless travels among Europe and America’s social and intellectual elite. We are privileged guests in the fragile universe of Virginia Woolf, who depended for emotional support and sanity not only on her human loved ones but also on her dogs, especially Pinka–a gift from her lover, Vita Sackville-West–a black Cocker Spaniel who became a strong, bright thread in the fabric of Virginia and Leonard Woolf’s life together.

Based on diaries, letters, and other contemporary accounts–and featuring many illustrations of the writers and their dogs–these five miniature biographies allow us unparalleled intimacy with women of genius in their hours of domestic ease and inner vulnerability. Shaggy Muses also enchants us with a pack of new friends: Flush, Keeper, Carlo, Foxy, Linky, Grizzle, Pinka, and all the other devoted canines who loved and served these great writers.” 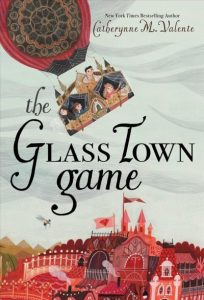 “Inside a small Yorkshire parsonage, Charlotte, Branwell, Emily, and Anne Brontë have invented a game called Glass Town, where their toy soldiers fight Napoleon and no one dies. This make-believe land helps the four escape from a harsh reality: Charlotte and Emily are being sent away to a dangerous boarding school, a school they might not return from. But on this Beastliest Day, the day Anne and Branwell walk their sisters to the train station, something incredible happens: the train whisks them all away to a real Glass Town, and the children trade the moors for a wonderland all their own.

This is their Glass Town, exactly like they envisioned it…almost. They certainly never gave Napoleon a fire-breathing porcelain rooster instead of a horse. And their soldiers can die; wars are fought over the potion that raises the dead, a potion Anne would very much like to bring back to England. But when Anne and Branwell are kidnapped, Charlotte and Emily must find a way to save their siblings. Can two English girls stand against Napoleon’s armies, especially now that he has a new weapon from the real world? And if he escapes Glass Town, will England ever be safe again? 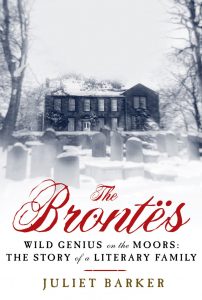 The Brontes: Wild Genius on the Moors – Juliet Barker

“The story of the tragic Brontë family is familiar to everyone: we all know about the half-mad, repressive father, the drunken, drug-addled wastrel of a brother, wildly romantic Emily, unrequited Anne, and “poor Charlotte.” Or do we? These stereotypes of the popular imagination are precisely that – imaginary – created by amateur biographers such as Mrs. Gaskell who were primarily novelists and were attracted by the tale of an apparently doomed family of genius.”

“Charlotte, Emily and Anne Bronte face a bleak future, with their father half-blind, and troubled brother Branwell in decline. As their situation worsens, Charlotte sees that writing could offer a way out. This is the story of the sisters’ great novels and their extraordinary battle for recognition.”