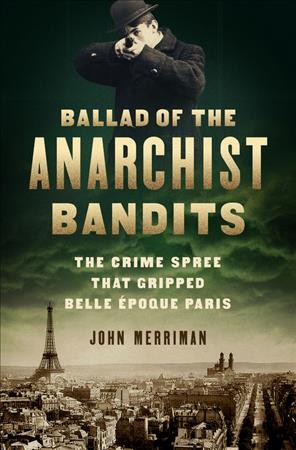 Ballad of the Anarchist Bandits is the story of a crime wave that gripped Paris and to a lesser extent the rest of France from 1911 to 1912. Although largely unknown today, it sent waves of panic throughout Paris. Headlines about the crime even drove the sinking of the Titanic of the front page of some newspapers. It also demonstrated the effects of the extreme wealth and poverty brought on by France’s rapid industrialization and highlighted the roll of new technology on crime.

The story opens one morning in 1911 on the Rue Ordener in Paris. A bank courier carrying money and securities for the Societe Generale got off a tram and was walking towards the bank a few hundred yards. Several men got out a luxury car parked at the curb, shot the courier, took the money and securities, got back in the car and sped off. Similar crimes robberies and murders would continue for months to come and spread across France and the police struggled to catch them.

Several things set this crime and the ones that followed apart. First was the use of car as a get away vehicle. A relatively new technology, the idea of using a car in a crime was unusual. It put the police, who at most had bicycles, at an extreme disadvantage. The second was the perpetrators of the crime itself. They weren’t generic criminals, they were Anarchists. Specifically Anarchist Illigalists.

Out of the many different variations on Anarchists in early 20th century Europe, Illigalists were probably the most dangerous. They espousing an extreme form of individualism and maintained, like many Anarchists, that all property was theft but they went a step further arguing that because it was theft stealing it back was not a crime. Illigalists made their “living” by committing robberies and counterfeiting. As they committed their crimes they often fell back on a network of other anarchists who weren’t illigalists per se but were will to hid them and provide them with support. What made the crimes committed by, what would become known as the Bonnot gang, were their use of firearms and cars.

Like all forms of Anarchism, Illigalists, grew out of the extreme poverty of early 20th century France and Europe as a whole. Merriman highlights the suffering of Paris’s poor. They worked long hours for little pay. What few labor laws existed to protect them, like the law mandating one day of rest a week, were regularly flaunted. Workers could and were regularly laid off and most lived a semi-nomadic existence moving to find work or cheaper housing. Merriman also makes the connection between this suffering and the lives of the Anarchists themselves. All the major participants in the crime wave were shown to have come out of the poverty of Paris and Europe as a whole. Many of the who committed the crimes showed an extreme level of fatalism.

In spite of opening with the crime, this books is a bit slow to start. This is due mostly to having to develop the history of industrial France and all the permutations of Anarchists. Once he gets past that thought the story picks up fast and has the feel of a modern day true crime story. Merriman does a great job of taking you inside the clandestine world of the Anarchists and paints a fascinating if grime view of Belle Epoque Paris.