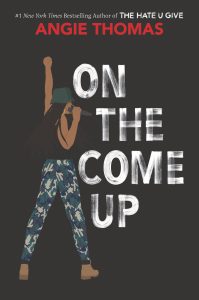 On the Come Up – Angie Thomas
“Sixteen-year-old Bri wants to be one of the greatest rappers of all time. Or at least get some streams on her mixtape. As the daughter of an underground rap legend who died right before he hit big, Bri’s got massive shoes to fill. But when her mom unexpectedly loses her job, food banks and shut-off notices become as much a part of her life as beats and rhymes. With bills piling up and homelessness staring her family down, Bri no longer just wants to make it—she has to make it.

On the Come Up is Angie Thomas’s homage to hip hop, the art that sparked her passion for storytelling and continues to inspire her to this day. It is the story of fighting for your dreams, even as the odds are stacked against you; of the struggle to become who you are, and not who everyone expects you to be; and of the desperate realities of poor and working class black families.” 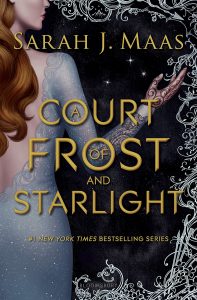 Court of Frost and Starlight – Sarah J Maas
“Narrated by Feyre and Rhysand, this bridges the events in A Court of Wings and Ruin and the upcoming novels in the series.

Feyre, Rhys, and their close-knit circle of friends are still busy rebuilding the Night Court and the vastly-changed world beyond. But Winter Solstice is finally near, and with it, a hard-earned reprieve. Yet even the festive atmosphere can’t keep the shadows of the past from looming. As Feyre navigates her first Winter Solstice as High Lady, she finds that those dearest to her have more wounds than she anticipated–scars that will have far-reaching impact on the future of their Court.” 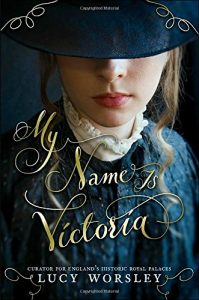 My Name is Victoria – Lucy Worsley
“Miss V. Conroy is good at keeping secrets. She likes to sit as quiet as a mouse, neat and discreet. But when her father sends her to Kensington Palace to become the companion to Princess Victoria, Miss V soon finds that she can no longer remain in the shadows. Her father is Sir John Conroy, confidant and financial advisor to Victoria’s mother, and he has devised a strict set of rules for the young princess that he calls the Kensington System. It governs Princess Victoria’s behavior and keeps her locked away from the world. Sir John says it’s for the princess’s safety, but Victoria herself is convinced that it’s to keep her lonely and unhappy. Torn between loyalty to her father and her growing friendship with the willful and passionate princess, Miss V has a decision to make: continue in silence or speak out.” 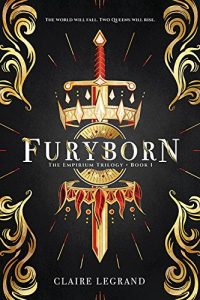 Furyborn – Claire Legrand
“When assassins ambush her best friend, Rielle Dardenne risks everything to save him, exposing herself as one of a pair of prophesied queens: a queen of light, and a queen of blood. To prove she is the Sun Queen, Rielle must endure seven elemental magic trials. If she fails, she will be executed…unless the trials kill her first.

One thousand years later, the legend of Queen Rielle is a fairy tale to Eliana Ferracora. A bounty hunter for the Undying Empire, Eliana believes herself untouchable―until her mother vanishes. To find her, Eliana joins a rebel captain and discovers that the evil at the empire’s heart is more terrible than she ever imagined.

As Rielle and Eliana fight in a cosmic war that spans millennia, their stories intersect, and the shocking connections between them ultimately determine the fate of their world―and of each other.” 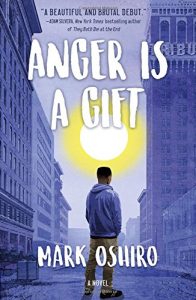 But sometimes Moss still wishes he could be someone else―someone without panic attacks, someone whose father was still alive, someone who hadn’t become a rallying point for a community because of one horrible night.

And most of all, he wishes he didn’t feel so stuck.

Moss can’t even escape at school―he and his friends are subject to the lack of funds and crumbling infrastructure at West Oakland High, as well as constant intimidation by the resource officer stationed in their halls. That was even before the new regulations―it seems sometimes that the students are treated more like criminals.

Something will have to change―but who will listen to a group of teens?

When tensions hit a fever pitch and tragedy strikes again, Moss must face a difficult choice: give in to fear and hate or realize that anger can actually be a gift.”