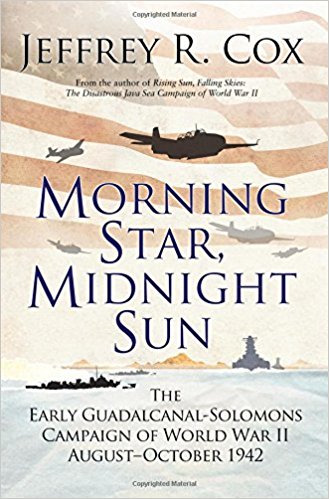 Jeffery Cox’s Morning Star, Midnight Sun is what I tend to think of as a “learning curve” study. A campaign, in this case the Guadalcanal campaign, or a theater of operations is presented to the reader as a bit of a shambles and then we watch as the participants slowly work out how to fight their particular war until they are finally victorious. These are very popular now and lend themselves very well to studies of World War II. Rick Atkinson’s Liberation Series is probably the best known example of this, tracing the American war effort from North Africa, to Italy to France and Germany. Ian Toll’s Pacific War trilogy takes a similar look at the Pacific theater. On a smaller scale is Neptune’s Inferno James D. Hornfischer which looks purely at the naval side of the Guadalcanal campaign. Cox shoots for something in between with a study that looks at the battle on the land, sea and air focusing on all the skills that all the participants had to learn (or in some cases didn’t learn) to create the out come.

Guadalcanal is a small South Pacific island towards the bottom of a chain of Islands called the Solomons and during World War II they represented the front line in the battle for the South Pacific. After the battles of The Coral Sea and Midway the Japanese sought to fortify what was their left flank as they attempted to subdue the Australians and Americans on New Guinea. To do this the started building a series of bases through the Solomon chain. The American’s decided to attack the one on Guadalcanal as a way of opening a new offensive in the war. This is the basic set up for the battle but it doesn’t cover all the political wrangling between Washington and the Navy and the Navy and the Army. Washington had committed itself to a “Europe First” strategy which meant just getting supplies and troops for the Pacific was fraught with difficulty. The Army’s General Douglas MacArthur felt he should be in charge of all the forces in the Pacific and when he wasn’t given that he often made things difficult for the navy’s operations.

Then there were the basic problems like learning to combat load transports so that the most important things troops would need like food, ammunition, and medical supplies were loaded last so they could be unloaded first. Or having a clear procedures for ships operating at night in enemy waters. All of these problems had to be worked out sometimes very painfully. For example the Battle of Savo Island when a Japanese flotilla got into the landing area off Guadalcanal at night and sank several cruisers and destroyers before is slipped away leaving the US navy one of its worst defeats.

In the face of these problems things often got very desperate for the Americans. The Marines on Guadalcanal were nearly overrun on several occasions. Air support from Henderson field, the airfield on the island, was down to just a hand full of planes at times. At one point there was only one operational aircraft carrier in the whole Pacific.

Cox lays all of these issues out in a clear and concise way with a very engaging writing style. That’s a good thing because this book is a deep dive when it comes to the details. He tends to veer towards the sarcastic at times. I kind of liked that but I can see how it would get on people’s nerves. One thing he does really well is he names the Japanese combatants. Not just the Admirals or Generals but even if its just a petty officer flying a Zero fighter who’s only on the page for a few seconds before he’s shot down that pilot is still named. That must have took a great deal of effort to do and it keeps the reader from forgetting the human toll taken by the Japanese.

If you like Atkinson or Toll this is definitely a book you would enjoy. If you liked Neptune’s Inferno you might find it a little repetitious but you will still get new information.