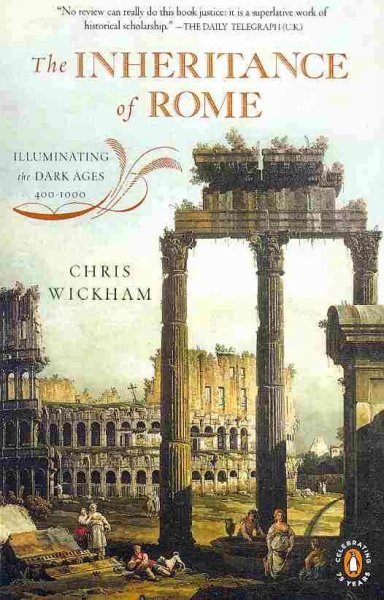 The first thing you learn from Inheritance of Rome is studying the dark ages is hard. The introduction is basically an explanation of why we can’t really know for sure what the dark ages were like. Not only are the sources limited but scholars are carrying around a lot of nationalist and modernist personal baggage that gets in the way too.

All of that said Wickham still sets out to tell us that what we think we know about the Dark Ages is a lot more complicated than we thought it was. He starts with the gradual process by which the Roman empire in the west slips out of existence leaving behind narrowly focused kingdoms run by various barbarian groups which in many ways took over the Roman bureaucratic system. From there he looks at how these new states evolved very slowly over time into what we think of as medieval countries.

But don’t forget there’s still a Roman empire in the east based in Constantinople which survives into the 15th century! This is one of the best things about this book. He doesn’t get so hung up on France, Spain, Italy and England that he forgets the dark ages in the eastern Mediterranean. Here its a totally different story. The empire doesn’t fall and in many respects keeps up remarkably well while the west’s economy declines.

What’s really fascinating though is how the book takes apart all the processes that created the middle ages. High school history races over the dark ages but here you get to see it unfold slowly over time. For example the Roman tax system that the barbarian kingdoms inherited was too complicated for them to run. It took too many people, too much time and lets face it Franks and Goths don’t want to pay taxes. Gradually the tax system gets replaced with a land based system where the King (who owns all the land) hands it out to his underlings who in exchange for their service on demand (usually to fight). So feudalism comes into being.

One warning I will give about this book is its written in an academic style. Its not hard to read but you will have to wade through lots of “this historian said this and that historian said that” plus he’s always telling you that the stuff that’s really interesting will be discussed 5 chapters ahead. If you can get by that it is a fascinating book and I got a ton out of it.