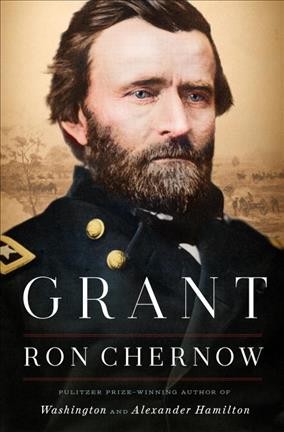 After the success of the Hamilton musical based on Chernow’s biography Alexander Hamilton, it is not surprising that Grant would be a hit. In fact it was such a hit, the History Book Group here at the library picked it for its September book. We will be discussing it September 19 at 7pm.

This like all Chernow books is a long one. It covers Grant’s life in minute detail. From Childhood to his death shortly after leaving the White House. While greatly admiring Grant, he doesn’t shy away from his flaws. His alcoholism and miserable business sense are revisited over and over again until the reader is desperate to see Ulys (as his wife Julia called him) a) not get drunk and b) not get swindled. You come away from the book thinking that Grant was a man with only one talent: War.

Much of the task that Chernow has set himself is in fact dispelling myths about Grant. He points out time and time again that Grant fought against his alcoholism. That he was more than a brainless butcher at war and in fact defeated Robert E Lee because he had a better strategic mind than Lee. That the corruption of his presidency was not his own corruption but was the result of his simple minded trust.

I enjoyed the book greatly however I had the same problem I always have with biography vs memoir. Biography is a whole life whereas memoir is just the interesting bits. To be honest I usually don’t care about the whole life. I generally want to read about the stuff that made the subject of the biography worthy of a biography. I found reading about Grant selling firewood on street corners in Saint Louis before the Civil War to keep from starving kind of uninteresting. On the other hand his time as a Union general and president of the US was fascinating.