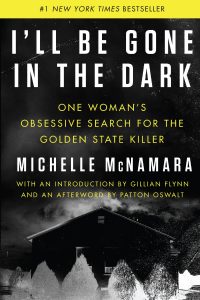 For more than ten years, a mysterious and violent predator committed fifty sexual assaults in Northern California before moving south, where he perpetrated ten sadistic murders. Then he disappeared, eluding capture by multiple police forces and some of the best detectives in the area. Three decades later, true crime journalist Michelle McNamara was determined to find the violent psychopath by poring over police reports, interviewing victims, and embedding herself in the online communities that were as obsessed with the case as she was. I’ll Be Gone in the Dark offers an atmospheric snapshot of a moment in American history and a chilling account of a criminal mastermind and the wreckage he left behind. It is also a portrait of a woman’s obsession and her unflagging pursuit of the truth.

I’ll Be Gone in the Dark: One Woman’s Obsessive Search for the Golden State Killer is one of only a handful of true-crime books to pop into the public consciousness* – not only because its author, Michelle McNamara, passed away while writing it, but also because a task force arrested their Golden State Killer suspect in April 2018 and now, four months later, he still seems like The One. The book is, on one hand, a straight-forward work of true crime, detailing the then-distinct crime sprees of the East Area Rapist and the Original Night Stalker, and, on the other, McNamara’s five-year journey to uncover the man she renames the Golden State Killer.

Although McNamara’s skill at writing shines through – her facts thoroughly researched, her transitions and anecdotes and compassion there among the heinous crimes referenced throughout – I found myself reading in fits and starts. The book engrossing one afternoon and then forgotten for the next several. Only on the third week of reading did I settle on some kind of answer: once I finished I’ll Be Gone in the Dark, my journey with Michelle would be over. Realizing in hindsight how close she came to answers, noticing how similar her methods of discovery were to what actually happened… the expectation of failure was almost worse than the actual crimes.

Knowing that Michelle would ultimately fail, that she would get so close and still come up short – that’s what hit me most after reading. Not the ten plus people the Golden State Killer murdered. Not the fifty-plus rapes or sexual assaults he perpetrated. Not the almost forty years of silence. It’s the irony of the thing – that perhaps, maybe McNamara became a victim herself.

Note: McNamara’s website, True Crime Diary, is still available for perusal, as is her article for Los Angeles Magazine, “In the Footsteps of a Killer.” The New York Times also wrote an op-ed prior to the book’s release that’s worth a read.

* Others include The Devil in the White City (Erik Larson), Helter Skelter (Vincent Buglilosi),  In Cold Blood (Truman Capote), Killers of the Flower Moon (David Grann), and The Stranger Beside Me by Ann Rule.