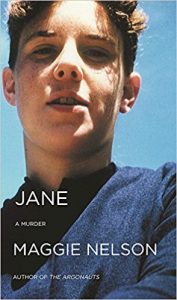 On March 20, 1969, the day after she slipped a color-coded piece of paper into an on-campus mailbox designated for ride sharing requests, University of Michigan student Jane Mixer was murdered. Picked up by the man who had replied to her request for a lift back to her hometown, a man she did not know and who used the name of another student as his signature, Jane was found the next day in an isolated cemetery outside Ann Arbor, propped up against a headstone. She had been shot twice in the head, one to the front and one to the back, and strangled. She was believed to be the fourth victim of a serial killer targeting co-eds; three other young women would lose their lives before police arrested John Collins in August of that year.

Born after her aunt’s murder, Maggie Nelson grew up keenly aware of Jane’s absence, and in adulthood felt a compulsion to put the pieces of her short life and death in order. Nelson read Jane’s diary and a small number of Jane’s letters. She read books about the Michigan Murders and went to libraries in search of articles on microfiche. She asked her mother questions and tracked down Jane’s boyfriend, Phil, whom Jane had planned to marry. Finally, with a map littered with pictures and notations spread open across the dash, Nelson took to the road to see the various crime scenes for herself. The result of her determination is Jane: A Murder, two hundred and twenty-one pages of poetry that crystalizes the horror and trauma of these crimes and their aftermath. She writes, “What transpired / for five and a half hours / between Jane / and her murderer / is a gap so black / it could eat / an entire sun / without leaving / a trace.”

The poems draw on and include entries from Jane’s diaries and the articles Nelson uncovered, as well as snippets from Plath’s poetry and Poe’s, while threads of conversations that transpired between Nelson and her family, with the police, and with Phil, are woven throughout. The reader is able to track the course of Nelson’s investigation and inquiries on the back of just a handful of words, which was both remarkable and a testament to Nelson’s skill and the choices she made line by line.

While it would appear as though the case, and therefore this book, reached a conclusive end, doubt kicked up dust at the time of Collins’ trial that lingers to this day, with some holding fast to the belief that he was not Jane’s murderer. Unlike the other young women, while Jane’s clothes had been disturbed, no evidence of sexual assault was found. Again, unlike the others, she was not beaten or mutilated, she was shot rather than stabbed, and her body had been deliberately arranged rather than dumped and/or hidden. Nelson doesn’t dwell on the possibility.

The subject matter is inherently disturbing, but, here, it is not put on sensational display. Details are handled with care. I wouldn’t say Nelson shields her reader from the darker, stomach-twisting aspects of these crimes, but opts to shine her light elsewhere. This book, then, would be a good fit for true crime readers looking for knowledge without attendant nightmares. 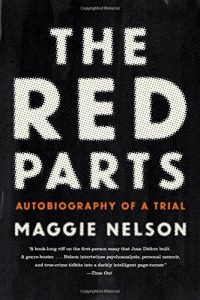 The Red Parts: Autobiography of a Trial – Maggie Nelson

“Late in 2004, Maggie Nelson was looking forward to the publication of her book Jane: A Murder, a narrative in verse about the life and death of her aunt, who had been murdered thirty-five years before. The case remained unsolved, but Jane was assumed to have been the victim of an infamous serial killer in Michigan in 1969.

Then, one November afternoon, Nelson received a call from her mother, who announced that the case had been reopened; a new suspect would be arrested and tried on the basis of a DNA match. Over the months that followed, Nelson found herself attending the trial with her mother and reflecting anew on the aura of dread and fear that hung over her family and childhood–an aura that derived not only from the terrible facts of her aunt’s murder but also from her own complicated journey through sisterhood, daughterhood, and girlhood.

The Red Parts is a memoir, an account of a trial, and a provocative essay that interrogates the American obsession with violence and missing white women, and that scrupulously explores the nature of grief, justice, and empathy.” 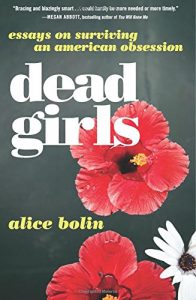 “In this poignant collection, Alice Bolin examines iconic American works from the essays of Joan Didion and James Baldwin to Twin Peaks, Britney Spears, and Serial, illuminating the widespread obsession with women who are abused, killed, and disenfranchised, and whose bodies (dead and alive) are used as props to bolster men’s stories. Smart and accessible, thoughtful and heartfelt, Bolin investigates the implications of our cultural fixations, and her own role as a consumer and creator.

Bolin chronicles her life in Los Angeles, dissects the Noir, revisits her own coming of age, and analyzes stories of witches and werewolves, both appreciating and challenging the narratives we construct and absorb every day. Dead Girls begins by exploring the trope of dead women in fiction, and ends by interrogating the more complex dilemma of living women – both the persistent injustices they suffer and the oppression that white women help perpetrate.

Reminiscent of the piercing insight of Rebecca Solnit and the critical skill of Hilton Als, Bolin constructs a sharp, perceptive, and revelatory dialogue on the portrayal of women in media and their roles in our culture.”