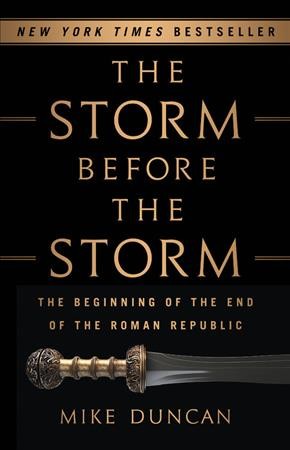 If you have read any Roman history or historical fiction it probably falls into two categories. Its set in the very late Republic and involves Pompey and Caesar and Octavian and Anthony duking it out over who’s going to control Rome. The other is set much later at the imperial period and involves the coming of Christianity to the empire. The Storm Before the Storm is fascinating because its neither of those things.

Duncan’s argument is essentially that if you want to understand what brought down the Roman republic you can’t just look at Pompey, Caesar, Octavian and Anthony. Their generation did bring about the demise of the republic but the template they used to do it wasn’t created by them. It was created by the generation of Romans who came before. They simply perfected its use.

The book opens with the final defeat of the Carthaginians and ends with the dictatorship of Sulla. In between are a multitude of wars, slave insurrections, political upheavals, riots and even a civil war. The key issues fall into three categorizes although they all interact with each other. At the level of the city of Rome there is the conflict between the plebeians and the patricians for power. In the Italian peninsula there was the conflict over who would have Roman citizenship and beyond the peninsula Rome’s grown empire and how it would be administered.

As all these conflicts race along Duncan is careful to point out all the moments where seemingly small decisions made in the moment lead to the collapse of the Roman republic a generation or two later. Things like the use of mobs by all political classes to enforce their will. Using a grain doll to control the masses. Waving the property requirement to join the legions. All these and many more lead Rome down a path towards what we think of as the end of the republic.

This book is a natural for Roman history buff but it would also be a good book for anyone who was a fan of Colleen McCullough’s Masters of Rome series one of the few historical fiction series to cover this period.