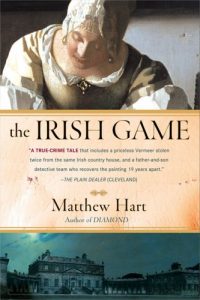 In the annals of art theft, no case has matched―for sheer criminal panache―the heist at Ireland’s Russborough House in 1986.

The Irish police knew right away that the mastermind was a Dublin gangster named Martin Cahill. Yet the great plunder ―including a Gainsborough, a Goya, two Rubenses, and a Vermeer― remained at large for years. Cahill taunted the police with a string of other crimes, but in the end it was the paintings that brought him low. The challenge of disposing of such famous works forced him to reach outside his familiar world into the international arena, and when he did, his pursuers were waiting.

The movie-perfect sting that broke Cahill uncovered an astonishing maze of banking and drug-dealing connections that redefined the way police view art theft. As if that were not enough, the recovery of the Vermeer―by then worth $200 million―led to a remarkable discovery about the way Vermeer achieved his photographic perspective.

The Irish Game places the great theft in Ireland’s long sad history of violence and follows the thread that led, as a direct result of Cahill’s desperate adventures with the Russborough art, to his assassination by the IRA. With the storytelling skill of a novelist and the instincts of a detective, Matthew Hart follows the twists and turns of this celebrated case, linking it with two other world-famous thefts―of Vermeer’s “The Concert” and other famous paintings at the Isabella Stewart Gardner Museum in Boston, and of Edvard Munch’s “The Scream” at the National Gallery of Norway in Oslo.

One might not be sure upon completing The Irish Game if they’ve just read a nonfiction book about art theft or a comedy of errors. Therein, however, lies a large dose of this book’s charm. Take this as a for instance: An FBI agent known for exhibiting high levels of competency in the field is brought into an undercover operation that is part of a larger plan to retrieve the stolen artwork. No sooner does he come into play that his cover is blown by a confidential note on FBI letterhead that he forgot to remove from a stack of photographs he was in the process of showing off to a small pack of criminals. How did the criminals react to this paper bombshell? They looked at the note on the floor, then at the FBI agent, and walked out. That’s it. They turned around and walked out of the building. How can you read that and not love that that was an actual thing that happened? Or that it wasn’t the only instance of law enforcement and the criminals they were after bungling their work in it’s-hard-to-believe-it’s-not-fiction fashion?

Tip: If you have access to Netflix, an episode of Raiders of the Lost Art covers the heists at the heart of The Irish Game. Charley Hill, a key player in the art’s retrieval, appears on the show. It’s well worth a watch if only to put that name to a face and personality.