The Treaty of Brétigny marks the end of the early phase of the Hundred Years War. The war which had been going on since 1337 was over English claims to the crown of France and English held lands in France. Four years before the treaty, the French King John II was captured at the Battle of Poitiers and held for ransom. The treaty besides recognizing English title to lands in France also allowed John to return to France to raise his ransom in exchange for hostages. Two years later Louis of Anjou, one of the hostages, escaped and John felt compelled to return to captivity in England where he died. The war resumed in 1367 and although it would last another 80 plus years the treaty was the high point of English power in France. 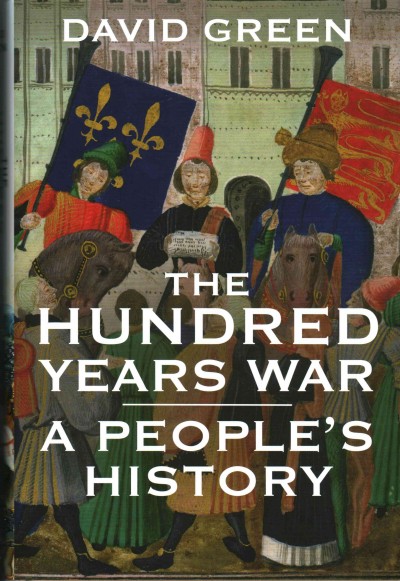 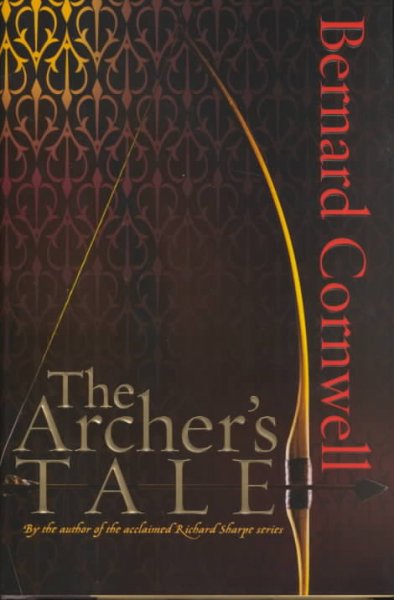 The Hundred Years War: A People’s History by David Green

The Hundred Years War (1337–1453) dominated life in England and France for well over a century. It became the defining feature of existence for generations. This sweeping book is the first to tell the human story of the longest military conflict in history. Historian David Green focuses on the ways the war affected different groups, among them knights, clerics, women, peasants, soldiers, peacemakers, and kings. He also explores how the long war altered governance in England and France and reshaped peoples’ perceptions of themselves and of their national character.

The Archer’s Tale by Bernard Cornwell

At dawn on Easter morning 1343, a marauding band of French raiders arrives by boat to ambush the coastal English village of Hookton. To brave young Thomas, the only survivor, the horror of the attack is epitomized in the casual savagery of a particular black-clad knight, whose flag — three yellow hawks on a blue field — presides over the bloody affair. As the killers sail away, Thomas vows to avenge the murder of his townspeople and to recapture a holy treasure that the black knight stole from the church. To do this, Thomas of Hookton must first make his way to France; So in 1343 he joins the army of King Edward III as it is about to invade the continent — the beginning of the Hundred Years War. A preternaturally gifted bowman, Thomas quickly becomes recognized as one of England’s most deadly archers in King Edward’s march across France. Yet he never stops scanning the horizon for his true enemy’s flag.

This was a treaty that officially ended the Thirty Years War between the Catholic Holy Roman Empire, Protestant Sweden and German principalities. It also ended the Eighty Years War between Span and the Dutch Republic over Dutch independence. It took almost two years to work out and was incredibly complicated. The final settlement among other things allowed local sovereigns to pick the official state religion but other faiths were allowed to practice their religion, Switzerland and the Dutch Republic were officially recognized as independent states. It also enshrined in the idea of a large diplomatic conference settling armed conflicts and idea that remains today in international law. 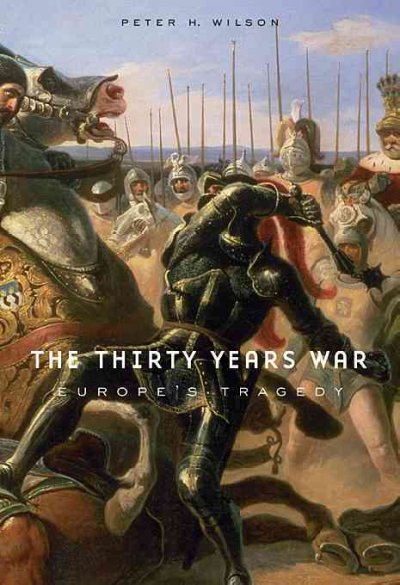 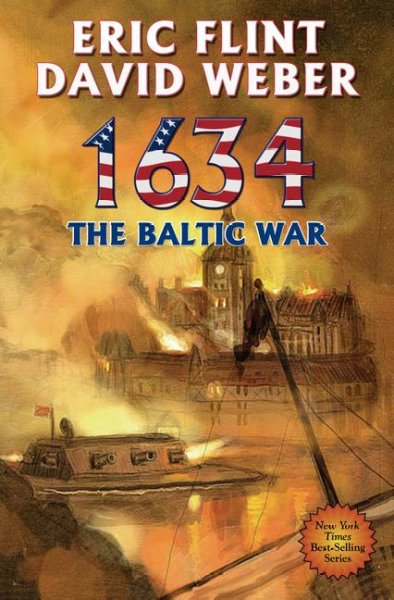 A deadly continental struggle, the Thirty Years War devastated seventeenth-century Europe, killing nearly a quarter of all Germans and laying waste to towns and countryside alike. Peter Wilson offers the first new history in a generation of a horrifying conflict that transformed the map of the modern world. By war’s end a recognizably modern Europe had been created, but at what price? The Thirty Years War condemned the Germans to two centuries of internal division and international impotence and became a benchmark of brutality for centuries. As late as the 1960s, Germans placed it ahead of both world wars and the Black Death as their country’s greatest disaster.

After a cosmic accident sets the modern West Virginia town of Grantsville down in war-torn seventeenth century Europe, the United States of Europe is forged in the fire of battle. The Baltic War reaches a climax as France, Spain, England, and Denmark besiege the U.S.E. in the Prussian stronghold of Lubeck. The invention of ironclads, the introduction of special force tactics during a spectacular rescue operation at the Tower of London – the up-timers plan to use every trick in the time traveler’s book to avoid a defeat that will send Europe back to a new Dark Age!

Lasting until November 19, the battle took place between Austria/Germany and Italy on the Austro/Italian front. The Austrians and Germans eventually broke through the Italian lines using infiltration tactics and poison gas. The Italian 2nd Army collapsed and was routed. It represented a colossal defeat for the Italians but due to lack of supplies and man power the Austrians could not exploit the victory 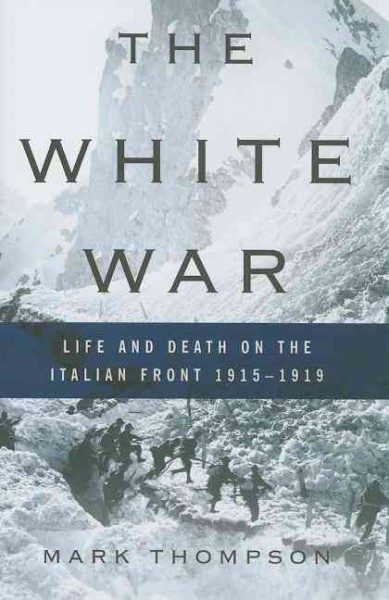 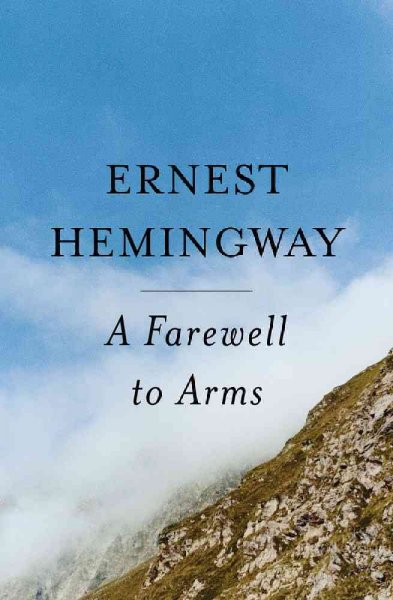 The Western Front dominates our memories of the First World War. Yet a million and half men died in North East Italy in a war that need never have happened, when Italy declared war on the Habsburg Empire in May 1915. Led by General Luigi Cadorna, the most ruthless of all the Great War commanders, waves of Italian conscripts were sent charging up the limestone hills north of Trieste to be massacred by troops fighting to save their homelands. This is a great, tragic military history of a war that gave birth to fascism. Mussolini fought in these trenches, but so did many of the greatest modernist writers in Italian and German – Ungaretti, Gadda, Musil, Hemingway. It is through these accounts that Mark Thompson, with great skill and empathy, brings to life this forgotten conflict.

A Farewell to Arms by Ernest Hemingway

A Farewell to Arms is the unforgettable story of an American ambulance driver on the Italian front and his passion for a beautiful English nurse. Set against the looming horrors of the battlefield – the weary, demoralized men marching in the rain during the German attack on Caporetto; the profound struggle between loyalty and desertion—this gripping, semiautobiographical work captures the harsh realities of war and the pain of lovers caught in its inexorable sweep. Ernest Hemingway famously said that he rewrote his ending to A Farewell to Arms thirty-nine times to get the words right.

Post World War I economic optimism lead to drastic over production in the American economy. Easy credit lead to heavy speculations in the markets. In March 1929 there was a mini-crash that was stabilized by an injection of credit by the National City Bank. Concerns remained though and in September a gradual sell off began on the New York stoke exchange that was exacerbated by a crash in the London stoke market on September 20. The sell off intensified through October until on the 24 when the stock market lost 11 percent of its value at the opening bell. Trading was so heavy no one really new was the price stokes were which increased the panic. The stoke market recovered briefly the next day, a Friday, but over the weekend as newspapers covered the events of Thursday people began pulling out of the market in what became known as Black Monday. 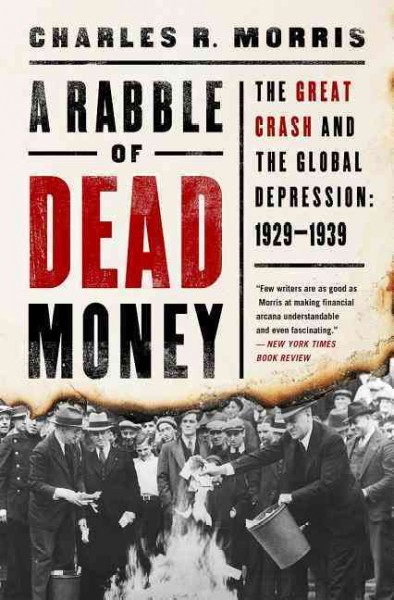 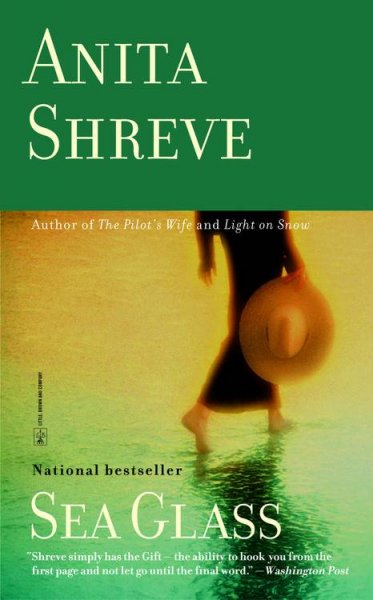 A Rabble of Dead Money: The Great Crash and the Global Depression, 1929-1939 by Charles R. Morris

The Great Crash of 1929 profoundly disrupted the United States’ confident march toward becoming the world’s superpower. The breakneck growth of 1920s America–with its boom in automobiles, electricity, credit lines, radio, and movies–certainly presaged a serious recession by the decade’s end, but not a depression. The totality of the collapse shocked the nation, and its duration scarred generations to come.  In this lucid and fast-paced account of the cataclysm, award-winning writer Charles R. Morris pulls together the intricate threads of policy, ideology, international hatreds, and sheer individual cantankerousness that finally pushed the world economy over the brink and into a depression. While Morris anchors his narrative in the United States, he also fully investigates the poisonous political atmosphere of postwar Europe to reveal how treacherous the environment of the global economy was. It took heroic financial mismanagement, a glut-induced global collapse in agricultural prices, and a self-inflicted crash in world trade to cause the Great Depression.
Deeply researched and vividly told, A Rabble of Dead Money anatomizes history’s greatest economic catastrophe–while noting the uncanny echoes for the present.

In the textile-manufacturing region of New Hampshire in 1929, newlyweds Honora and Sexton Beecher wrestle with all the wonders and challenges that young couples have always faced. They’ve just purchased a house near the ocean that needs a lot of work, but the couple is dedicated to making it a home. When the economy fails and a single unscrupulous act perpetrated by Sexton is revealed, more than love will be required to keep the marriage from collapsing under the weight of this betrayal. Sexton — formerly a traveling salesman — is forced to take a job at the local mill alongside other men, women, and children whose very survival is being threatened by the harsh burden of their daily toil. Repeated pay cuts and inhumane conditions propel the workers closer to a potentially violent clash with management and union breakers. Alliances are formed, honor is challenged, and character flaws become fatal as the tinderbox explodes, leaving old bonds broken and new ones bolstered