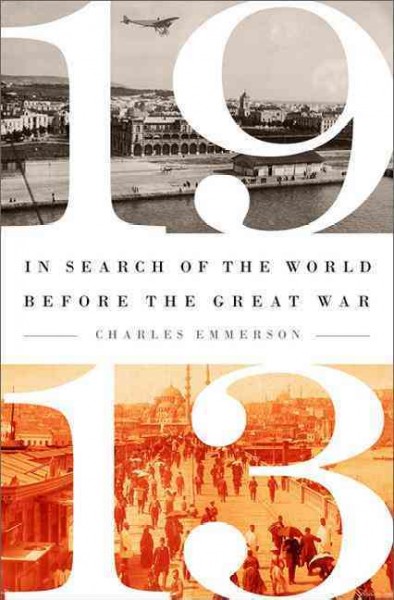 Charles Emmerson’s 1913 is a book I’ve been meaning to read since it came out in 2013. What drew me to it was actually my enjoyment of The Proud Tower by Barbara W Tuchman. You might remember Tuchman for Guns of August about the opening couple of months of World War I (Guns of August is also the December pick for the History Book Club). Proud Tower was meant to be a prequel to that laying out how history from 1900 to 1914 lead to World War I. I thought 1913 might be an even more focused equivalent of that. It was sort of.

If you want incites into why World War I began, you might find them or you might not, but the author isn’t going to point them out to you. Emmerson wants his read to see the world on the eve of World War I as the people living it would have without the knowledge that war is about to devastate Europe. That’s a tough order since any reader is going to read into it what comes next but he give it a shot.

1913 at its core is a walk though of the world in 1913. Starting in London and giving the reader an overview of the city and its recent history, how it fits into the world as a whole and how the world sees it. He expands out from there: Paris, Berlin, Austria, St Petersburg and then the major cities of the world. Always following the same format as London.

In that sense it is an enjoyable window into the world on the eve of World War I to a point that you sometimes forget what’s about to happen. This is a very urban-centric view of the world. Only the very large cities get a view in and large swaths of the world are either left as afterthoughts or untouched all together. To a lesser extent the book skews towards the wealthy and powerful. The poor and powerless are there but they don’t get the same coverage as such dominating figures as the Kaiser or the Czar. Still for what it is it is an enjoyable read.