The first two of the following titles are on top of the pile so that I can discuss them with sixth graders at the middle school (or, barring that, as a potential summer reading option). 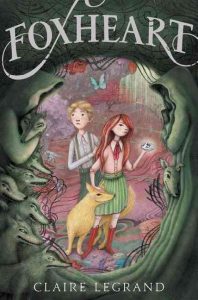 Twelve-year-old Quicksilver dreams of becoming the greatest thief in the Star Lands. With her faithful dog and partner-in-crime Fox, she’s well on her way—even if that constantly lands them both in trouble. It’s a lonesome life, sleeping on rooftops and stealing food for dinner, but Quicksilver doesn’t mind. When you’re alone, no one can hurt you. Or abandon you.

But the seemingly peaceful Star Lands are full of danger. Witches still exist—although the powerful Wolf King and his seven wolves have been hunting them for years. Thankfully, his bloody work is almost complete. Soon the Star Lands will be safe, free of the witches and their dark magic.

Then one day a strange old woman and her scruffy dog arrive in Quicksilver’s town and perform extraordinary magic. Real magic—forbidden and dangerous. Magic Quicksilver is desperate to learn. With magic like that, she could steal anything her heart desires. She could even find her parents.

But the old woman is not what she seems, and soon Quicksilver has to decide—will she stay at home and remain a thief? Or will she embark upon the adventure of a lifetime and become a legend?

So far, the physical and magical landscape of Foxheart has been a delight to traverse. And, honestly, any story that includes a character known as the Wolf King, no matter his/her/their status as hero or villain or something in between, is almost guaranteed to be a-okay with me. I am slightly (read: extremely) concerned about Fox, Quicksilver’s canine companion, and am keeping my fingers tightly crossed that he makes it to the end of the book unscathed. 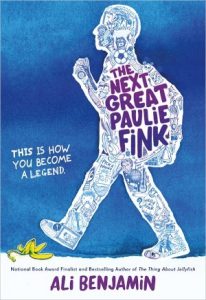 When Caitlyn Breen enters the tiny Mitchell School in rural Mitchell, Vermont, she is a complete outsider: the seventh grade has just ten other kids, and they’ve known each other since kindergarten. Her classmates are in for a shock of their own: Paulie Fink–the class clown, oddball, troublemaker, and evil genius–is gone this year.

As stories of Paulie’s hijinks unfold, his legend builds, until they realize there’s only one way to fill the Paulie-sized hole in their class. They’ll find their next great Paulie Fink through a reality-show style competition, to be judged by the only objective person around: Caitlyn, who never even met Paulie Fink. Who was this kid, anyway–prankster, performance artist, philosopher, or fool? Caitlyn’s quest to understand Paulie is about to teach her more about herself than she ever imagined.

Told via multiple voices, interviews, and other documents, The Next Great Paulie Fink is a lighthearted yet surprisingly touching exploration of how we build up and tear down our own myths… about others, our communities, and ourselves.

An opportunity to hear Ali Benjamin speak presented itself at a recent conference focused on middle grade and young adult fiction. Her keynote speech was highly engaging, and her reasons for writing The Next Great Paulie Fink made me and my colleague want to read it as soon as possible. I mean, a middle grade novel that turns an eye on Plato’s Allegory of the Cave as well as the formula behind the spate of reality shows on offer? While exploring the nature and importance of empathy and accepting others as they are? Starring baby goats, and young girls in overly large power suits, and a school building that gives off The Secret History vibes? Yes, ma’am, I’ll take that Advanced Readers’ Copy. Look for this one in April.

And strictly for myself… 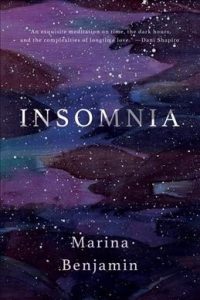 Insomnia is on the rise. More than a third of all adults report experiencing it, with the figure climbing steeply among those over sixty-five. Marina Benjamin takes on her personal experience of the condition–her struggles with it, her insomniac highs, and her dawning awareness that states of sleeplessness grant us valuable insights into the workings of our unconscious minds. Although insomnia is rarely entirely welcome, Benjamin treats it less as an affliction than as an encounter that she engages with and plumbs. She adds new dimensions to both our understanding of sleep (and going without it) and of night, of how we perceive darkness.

Along the way, Insomnia trips through illuminating material from literature, art, philosophy, psychology, pop culture, and more. Benjamin pays particular attention to the relationship between women and sleep–Penelope up all night, unraveling her day’s weaving for Odysseus; the Pre-Raphaelite artists’ depictions of deeply sleeping women; and the worries that keep contemporary females awake.

I’ve only just cracked this one open, but the very first page was proof enough: I’m going to get along with the rest just fine. 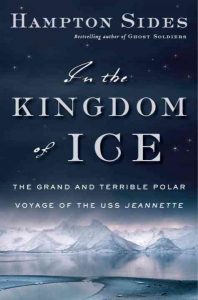 In the Kingdom of Ice: The Grand and Terrible Polar Voyage of the USS Jeannette – Hampton Sides

On July 8, 1879, the USS Jeannette set sail from San Francisco to cheering crowds in the grip of “Arctic Fever.” The ship sailed into uncharted seas, but soon was trapped in pack ice. Two years into the harrowing voyage, the hull was breached. Amid the rush of water and the shrieks of breaking wooden boards, the crew abandoned the ship. Less than an hour later, the Jeannette sank to the bottom,and the men found themselves marooned a thousand miles north of Siberia with only the barest supplies. Thus began their long march across the endless ice-a frozen hell in the most lonesome corner of the world. Facing everything from snow blindness and polar bears to ferocious storms and frosty labyrinths, the expedition battled madness and starvation as they desperately strove for survival.

The larger than life characters. The writing. There is so much to appreciate and take from In the Kingdom of Ice. Sides’ description of the Centennial Exhibition held in Philadelphia in 1876, for instance, was so compellingly drawn as to induce a keen longing for time travel. Likewise, he renders the landscape of the Arctic in vivid detail, fixing the reader in place onboard ship with spectacular views and zero risk. Sides also paints a bright (occasionally jaw-dropping) picture of DeLong, James Gordon Bennett (the owner/editor of the New York Herald; rich as Croesus, Bennett purchased the Jeanette and funded the expedition), August Petermann (a German cartographer thought at the time to be one of the leading experts on all things Arctic/Polar related), and many others. Outrageous antics, humbling heroics, hard-fought battles with personal demons and trauma—the gamut of human nature is represented in the people who lived this story.