In her September newsletter Deanna Raybourn*, author of the Veronica Speedwell series and the Lady Julia Grey series, shared an intriguing list of books, several of which I plan to read. This, in particular, sounded really interesting: 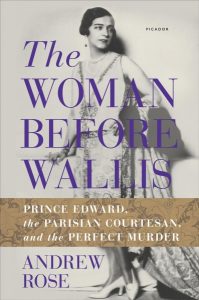 The Woman Before Wallis: Prince Edward, the Parisian Courtesan, and the Perfect Murder – Andrew Rose

“Prince Edward was the King of England when he famously abdicated his crown over his love for the American divorcée Wallis Simpson. But two decades earlier, he was an inexperienced young man, stationed behind the lines during World War I, socializing with the elite aristocracy of Europe while fellow soldiers were being shelled in the trenches. Gradually, the awkward young man, who was desperate to see action, became involved in a very different sort of action―when his path crossed with the queen of the Paris demimonde.

Marguerite Alibert was a beautiful but tough Parisian who had fought her way up from street gamine to a woman haut de gamme, possibly the highest-ranking courtesan in Paris. She entertained some of the richest and most powerful men in the world―from princes to pashas. When the inexperienced Prince Edward was introduced to the alluring Marguerite, he was instantly smitten. After their tumultuous love affair ended, Edward thought he was free of Marguerite, but he was wrong. Several years later, Marguerite murdered her husband―a wealthy Egyptian playboy―by shooting him three times in the back at the Savoy Hotel in London. When Marguerite stood trial for murder, Edward was at risk of having his affair and behavior during the war exposed. What happened next was kept from the public for decades, uncovered thanks to exceptional access to unpublished documents held in the Royal Archives and private collections in England and France.”

If you’d like to check out the rest of Deanna’s recommendations for books on “Women Behaving Badly”, here’s a link to the newsletter: https://lists.writerspace.com/w/41sVah5PchvbHsdjiaRm7A/e6IicO3S49aZI36892YiGQvg/SJsuCgEhVPbbtFQ5BLS8bg

*Some of you might remember that Ms. Raybourn spoke here at the PIL a number of years ago, as many of the staff and patrons were fans of her Lady Julia series. 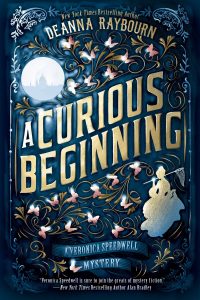 A Curious Beginning (A Veronica Speedwell Mystery, book 1)
“London, 1887. After burying her spinster aunt, orphaned Veronica Speedwell is free to resume her world travels in pursuit of scientific inquiry—and the occasional romantic dalliance. As familiar with hunting butterflies as with fending off admirers, Veronica intends to embark upon the journey of a lifetime.

But fate has other plans when Veronica thwarts her own attempted abduction with the help of an enigmatic German baron, who offers her sanctuary in the care of his friend Stoker, a reclusive and bad-tempered natural historian. But before the baron can reveal what he knows of the plot against her, he is found murdered—leaving Veronica and Stoker on the run from an elusive assailant as wary partners in search of the villainous truth.”

Silent in the Grave (A Lady Julia Grey Mystery, book 1) 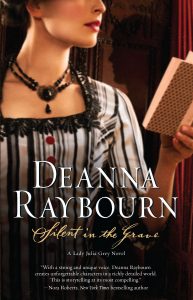 “Let the wicked be ashamed, and let them be silent in the grave.

These ominous words are the last threat that Sir Edward Grey receives from his killer. Before he can show them to Nicholas Brisbane, the private inquiry agent he has retained for his protection, he collapses and dies at his London home, in the presence of his wife, Julia, and a roomful of dinner guests.

Prepared to accept that Edward’s death was due to a long-standing physical infirmity, Julia is outraged when Brisbane visits and suggests that her husband was murdered. It is a reaction she comes to regret when she discovers damning evidence for herself, and realizes the truth.

Determined to bring the murderer to justice, Julia engages the enigmatic Brisbane to help her investigate Edward’s demise. Dismissing his warnings that the investigation will be difficult, if not impossible, Julia presses forward, following a trail of clues that lead her to even more unpleasant truths, and ever closer to a killer who waits expectantly for her arrival.”