My name is Søren, and I’m a new reviewer/recommender for the Read This blog! I mostly read YA books in accessible formats like audiobooks, so know that almost all the books I review will be available in audio CD or digital audio format from MA public libraries. I’m going to start off my contributions here with a new book that surprised and comforted me, by an author I’ve seen a lot of buzz about in the last year. It started with a GoodReads book giveaway and some incredible cover magic that led me to excitedly seek whatever audiobooks I could find by this author. I was rewarded this fall with the release of Summer Bird Blue by Akemi Dawn Bowman. 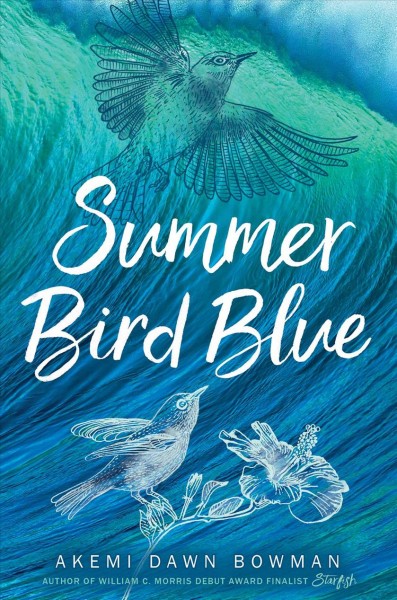 Akemi Dawn Bowman is a relatively fresh author in the world of YA novels. She was a finalist for the Morris Debut Award in 2017. Her debut novel Starfish was a lauded contribution to modern youth literature and addressed mental health issues youths regularly face, and abusive family situations. Bowman’s writing style is candid, moving, and richly detailed, and her books tend to be character-driven and issue-oriented. I personally love stories that focus on character development with simple, authentic writing and emotional appeals. So with this writing style and the eye-catchingly beautiful cover art for both her published novels so far, I knew Bowman was worth a shot. (It’s okay to be a little superficial and appreciate excellent cover art. No shame, folks!)

This second novel by Bowman is an exploration of grief and identity. Main character Rumi has just lost her sister Lea in a car crash. To make things worse, her mother is sending her off to live with her aunt in Hawaii for the summer. Now Rumi has to process her sister’s death alone so her mom can have some space to heal without having to be a mother. So, Rumi flies halfway across the Pacific Ocean to give her mom space. But how’s she supposed to heal when what she needs is to be together? Oscillating between numbness and anger, Rumi tries to make sense of the world without her sister, her musical partner, her other half. She makes it a goal to finish the song they were writing together in the car before Lea died–a way to give her one last wish-come-true she’d promised her years ago. But Rumi feels like she’s lost her connection with music, too; how can she play music without her sister? Does she deserve to play music while Lea can’t? Does she deserve to live while Lea can’t?

Summer Bird Blue is moderately paced with diverse characters and a beautiful setting. Bowman’s juxtaposition of grieving, angry Rumi with the colorful, bright setting of Hawaii and the grounded people she meets there offers strong imagery for the disconnect between Rumi’s internal world and the more cheerful external world about her. But Rumi also finds connection in Hawaii with her aunt’s neighbors who are hurting from similar losses, or fighting through difficult situations by enjoying what they can to the fullest until it’s taken from them. Throughout her summer, Rumi not only explores her identity without her sister; she also becomes more familiar with herself as an ace and questioning-aro young woman who’s always felt out of place for not being interested in dating. She becomes more confident in how she is, and follows her heart when she knows a relationship doesn’t feel right. Rumi is a believable character with a harsh personality, a loving heart, and a growing sense of herself as an individual. Her heart-wrenching pain and depressive sorrow will speak to those who have lost someone close to them. Readers may also appreciate Bowman’s rounded and complex exploration of Rumi’s ace/questioning-aro identities while figuring out how she connects with and feels about the people in her life.

This novel bolted onto my shortlist of TBR books because of its ace/aro representation. There just aren’t enough books out there with this kind of character. I’m always looking for stories that act as mirrors to my own experiences in addition to acting as windows into unfamiliar ones, and I couldn’t pass up this rarer kind of representation. And the best part is that this isn’t a problem/issue book about the character’s attraction identity; it’s about her grief process. Summer Bird Blue is definitely an under-the-radar LGBTQIA+ book, and I’m here for it. When I heard Bowman’s ace/aro main character was #ownvoices, I was sold. I was also excited about the other #ownvoices representation in this book; following in the spirit of BookRiot’s Read Harder challenge, I made it a target to read about more diverse experiences, by authors from different cultures/races/backgrounds than myself. This book again fit the bill, with a diverse cast of characters and #ownvoices biracial Japanese-and-white representation.

Something I especially enjoyed in this book was Bowman’s use of flashback scenes to Rumi’s memories of her and her sister. We know the angry, grieving Rumi of the present from the main story. With the memories, we get a sense of the loving, if sometimes turbulent, dynamic she and her sister had, and the bond they shared as siblings and best friends. These scenes help further humanize Rumi as someone who isn’t always bitter, but definitely as someone who’s always needed extra support and help from the people she trusts. Rumi’s humanizing humor comes through in these flashbacks as well, especially in her crap-sandwich method of speaking her thoughts to her sister and mother: “Your hair smells like flowers. Kissing makes me feel like you’re violating my personal space. I like your lipgloss.”  It was also a pleasant, refreshing surprise to read a character who’s an angry trauma survivor and an angry griever, as opposed to the more common trope of sad/broken trauma survivors and grievers. I think Bowman did right by the trauma community with her choice to have Rumi be filled with rage for a large portion of the book; too often, trauma survivors are written in a way that ignores or puts into question the validity of non-sadness responses to their traumas.

Bowman’s message with this work is that everyone needs time to grieve, and sometimes, what we need most are the things we aren’t ready to face and connect with. If you enjoy emotionally intense but otherwise easy reads, give Summer Bird Blue a go and immerse yourself in Bowman’s trying and hopeful story about the healing power of human connections and music, and the internal struggle against moving forward for fear of moving on.