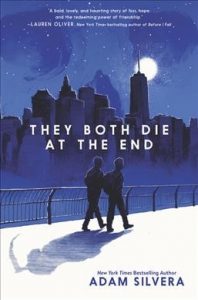 I finished They Both Die at the End by Adam Silvera four days ago, but the ending of this novel and the entire plot that surrounds the characters has been weighing heavily on my mind since then. When one decides to read a book with such an ominous sounding title, one might expect the ending to be heart wrenching – and I won’t lie to you, it absolutely was. But the story is about more than the concept of knowing when your time is up and is instead a lesson in learning how to live our lives while we have them.

This novel centers around two boys named Mateo and Rufus, both of whom have received calls from Death-Cast, letting them know that at some point in the next 24 hours, they are going to die. It might be easy to say that there’s no point in reading a novel where the author has already disclosed the ending to you, but if you choose to pass on this one, I promise you that you’re missing out. Join this unlikely couple of young men as they become friends on their last days on Earth while they discover both the benefits and the detriments to knowing when the curtain plans to fall.

Adam Silvera weaves a beautiful tale of friendship, love, and ultimately loss in a book that is refreshingly up front about the concept of death. As a topic many of us avoid, but do eventually think about, this story of Mateo and Rufus inspires the readers to get out there and live instead of hiding from life and all of the joyous experiences that come with living fully.

At the end of this novel, you may find that like me, you are questioning the one encompassing concept that Silvera forces on his characters. Is it better to live life never knowing when your final day has arrived? Or is it easier to know when the bell tolls for thee?

For more of Adam Silvera’s work check out What if it’s Us, More Happy than Not, and History is All You Left Me, all of which are available at our library.