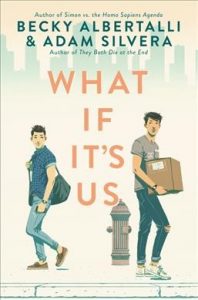 There are some people who believe that the universe sets plans in motion for a reason, and some that are cynical enough to believe that the universe is against them. Arthur is only in NYC for the summer, so looking for love would be a waste of his time, right? Ben has been cheated on and lost not only his boyfriend but also one of his friends — finding love again should be the last thing on his mind, right? So when Ben meets Arthur in the post office while dropping off a box of his ex-boyfriend’s belongings and a flash mob breaks out, separating the pair just as they were hitting it off, Ben considers that the universe’s way of screwing him over for yet another time. But for Arthur, who believes in the power of the universe, this was just a test to see how far he would go to meet the guy of his dreams.

In a less than surprising turn of events, superstar authors Becky Albertalli (Simon vs. the Homo Sapiens Agenda) and Adam Silvera (They Both Die at the End) have created another masterpiece, this time teaming up to give hope back to those that have stopped believing that the universe works in mysterious ways. Together Albertalli and Silvera help weave a tale of new love, heartbreak, and the power of friendship as told through the voices of two young gay men. Though love takes center stage in this novel, the theme of friendship takes hold and doesn’t let go even after you’ve finished the book. It is a beautiful tale about finding love in unexpected places, and holding on to friendships even when the romance has faded away.

So if you have a New York minute and find yourself craving a light romance that still packs a punch at the end, I highly recommend settling in for What if it’s Us by Becky Albertalli and Adam Silvera.