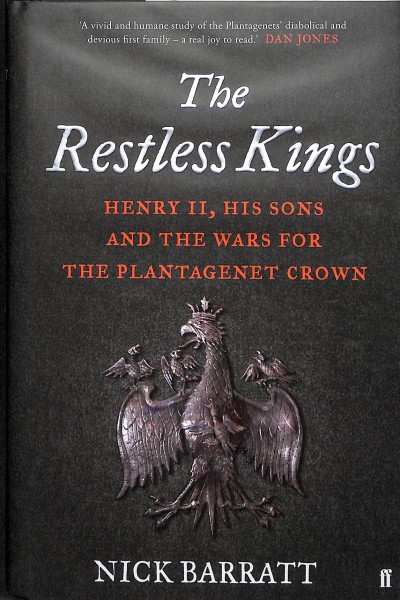 Ever wanted to be king? Yeah don’t it kind of sucks. At least that’s the feeling I got from The Restless Kings On the other hand if you are curious what its like being a king in the 12th century this is the book for you. This book traces the events of Henry II from is early days trying to capture the English throne to the disastrous rule of his son John.

Henry leads one of those lives that you practically need a chart to keep track of. Son of Matilda the chosen successor of Henry I. Unfortunately the English don’t want a female leader so a nephew, Steven I, and England descends into a state of civil war until Steven dies without a successor and Henry becomes Henry II. While all this is going on he’s been made the duke of Normandy and Anjou. He’s married Eleanor of Aquitaine, probably the biggest badass of the 12 century. Marring her basically gives him control of half of France as well as England.

The main argument of the book is that if you want to be an even marginally good monarch in the 12th century you’ve got to keep moving. Henry spent most of his rule on the road. There was no center of government. Government was where ever Henry was. The only office of government that had a stable location was the exchequer at Westminster. Everyone else moved with the king from crisis to crisis usually with an army at its back.

He has to deal with various conflicts between his nobles because the civil war has left land titles a mess. He has to fight it out with the church for the right to try clergy in his courts. He has to fight a war against his sons and his wife (because you don’t sideline Eleanor of Aquitaine without a fight). He wins some and he loses a lot but in the end he dies leaving a semi-stable land to Richard I who is a marginal leader at best and only because most people are comparing him to his brother John who’s a train wreck.

Anyone who has a love of medieval history will find this a pretty fast paced read. Also if you are fans of Sharon Kay Penman’s Henry II novels as well as her Justin de Quincy mysteries this book gives you even more background to those stories.