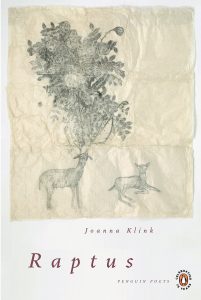 “Everywhere, a forceful, scrupulous intelligence is active- a luminous diction, a range of cadences.” So has Mark Strand written of the work of Joanna Klink, who has won acclaim for elegant, sensual, and musical poems that “remain alert to the reparations of beauty and song” (Dean Young). The linked poems in Klink’s third collection, Raptus, search through a failed relationship, struggling with the stakes of compassion, the violence of the outside world, and the wish to anchor both in something true. 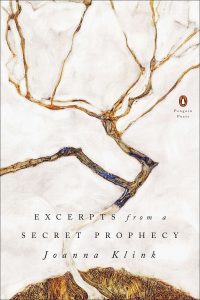 Excerpts From a Secret Prophecy

The poems in Klink’s new collection offer a closely keyed meditation on being alone—on a self fighting its way out of isolation, toward connection with other people and a vanishing world. 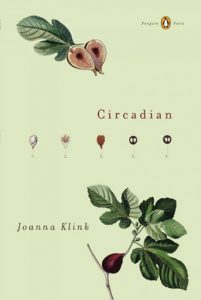 The poems in Joanna Klink’s new collection Circadian take as their guiding vision circadian clocks. Moved by the presence and withdrawal of light, these internal clocks influence rhythms of sleeping and waking: the opening and closing of flowers, the speed at which the heart pumps blood, the migratory cycles of birds. With love poems and prayers, Joanna Klink offers us patterns of glowing alertness and shared life, patterns that speak to the flickering circuit between inner and outer landscapes, that bind each beating heart to the pull of the tides. 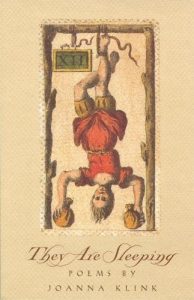 In They Are Sleeping, Joanna Klink tests the limits of solitude, setting her poems in places where our grip on “self” is loosened and blurred―caves, coastlines, rooms in cities. As her poems lead us through these sometimes beautiful, sometimes appalling internal landscapes, characters like the Hanged Man and the Lady of Situations reappear, often locked in misunderstanding but compelling us toward a more fragile and expansive sense of self.