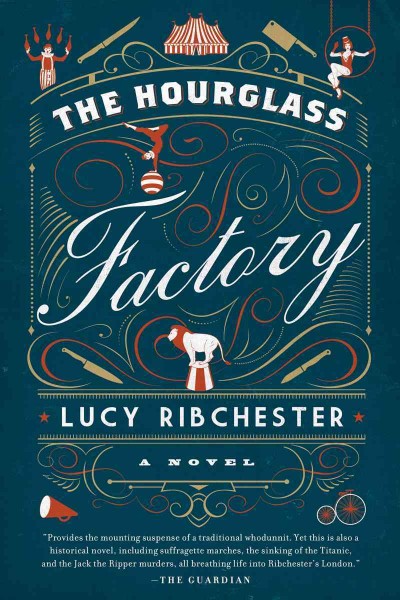 I quite literally found this book by accident. I had an appointment at a local Minute Clinic to see about a persistent cough I had (turns out it was bronchitis) but was a little early. I ducked into a bookstore to kill sometime and the first book I laid eyes on was Lucy Ribchester’s Hourglass Factory. I’ll be the first to admit book covers really get my attention. This one was dark blue with a circus theme. The cover doesn’t do the story justice.

Set in 1912 London at its hart Hourglass Factory is a mystery. Ebony an aerialist and suffragette disappears in mid-dive in front of an audience of hundreds.  Francesca “Frankie” George a low level report for the lady’s page of a newspaper who has been assigned to write a piece on Ebony, sees is in the crowd. Frankie sees this as her big chance. Solve the mystery and become a real reporter. In her quest she picks up a colorful crew of circus performers, a socialite and street urchins. What she uncovers is a complicated social/political conspiracy with a dash of fetishism.

Running in parallel to this story is the investigation of Inspector Primrose head of the suffragette division of Scotland Yard. He is also tasked with finding Ebony but for different reasons. Well meaning, if very out of his depth, he tries to navigate a world of police officers who treat the suffragettes with nothing buy misogynistic contempt.

The story itself is at times overwrought but the world of early 20th century that Ribchester brings to life is glorious. From the polyglot neighborhoods of Soho to the newsrooms of Fleet street the picture is so vivid it can give you sensory overload. Ribchester does a great job of giving a modern reader a sense of the horror and revulsion felt by the general public towards the suffragettes. Suffragettes differed from suffragists in that they were willing to go to drastic means to get the right to vote. Riots, attacks on shops, assaulting members of parliament. In turn the suffragettes where jailed as common criminals and when they went on hunger strike to protest they were force fed. The authorities turned this feeding into a grotesque form of torture involving forcing hoses down throats or up noses.

I’d recommend this book just for the setting alone. The story can be a little hard to keep track of but in the end it is very satisfying.