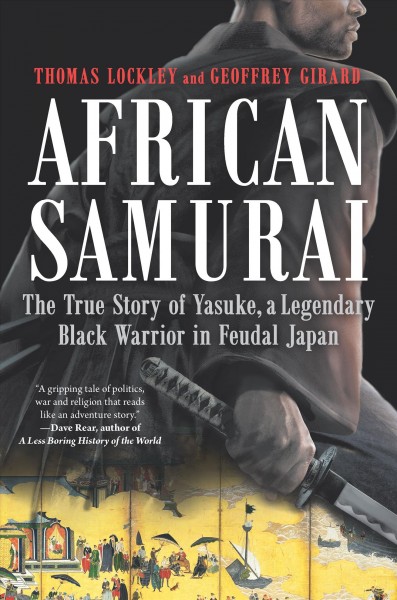 Before William Adams (immortalized as John Blackthorn in James Clavel’s novel Shogun) became the first English samurai in the early 1600s there was Yasuke. Yasuke was an African slave/mercenary who ultimately become a samurai and served as a retainer of Ode Nobunaga a Japanese warlord from the Waring States period of Japanese history. Lockley’s African Samurai is a fast paced story of both Yasuke and 16th century Japan.

It is not wholly clear what Yasuke’s origines were but he probably came from somewhere in modern day Ethiopia or Sudan. As a young boy he was captured by slavers and sold. He eventually ended up as a Hapshi, a slave soldier in a warlord’s army in India. From there he became a body guard to the Jesuit Visitor General Alessandro Valignano, the man in charge of overseeing Jesuit missions all over Asia. A long circuitous route eventually took them to Japan where Yasuke met Ode Nobunaga a Japanese warlord on the verge of reuniting the waring states of feudal Japan.

Yasuke’s story is extremely compelling and Lockley tells it in a fast pace intimate fashion. Sometimes a little to intimate. He often refers to Yasuke’s facial expressions in different situations and it always made the hair on the back of my neck stand on end “how could he know that?” Historical documents are rarely that specific. And it turns out that much of the specifics story of the book were based on educated guesses. Most of what is known of about Yasuke comes from letters written by the Jesuits which are admittedly detailed for the time. He is also occasionally referenced by Japanese diarists. But facial expressions and discussions of what he was thinking are the authors creation not that of the historical record.

That said where this book really excels is giving its western audience a very clear run down of this period in Japanese history. He lays out how the samurai developed, the decline of central authority, the rise of weaker states and the gradual re-consolidation of those states into what we think of today as Japan. So if you are prepared to take some of Yasuke’s story with a grain of salt it will be a very enjoyable and educational read.