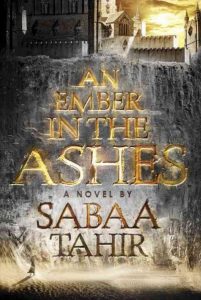 Growing up I loved to read books that let me immerse myself in imaginary words. From Hogwarts to Middle-Earth to Narnia, there was simply something magical about escaping reality and diving into the pages of a great book. While in college, I strayed away from reading fantasy novels and instead traded in my enjoyment reading for textbooks and research articles. Though I wanted to read books of my choice, I simply did not have the time or energy. However, a few summers ago, I became involved with reading potential titles for the middle school summer reading list both as a way to help out and to push myself to read something that hadn’t been written in the 1800s or published in a scientific journal. Michelle (who you know from Michelle Recommends) told me that she had a title in mind that she thought I would like, An Ember in the Ashes by Sabba Tahir. After reading the back cover and first page, I was intrigued. The story was from a debut author and it seemed as though she had created an entire new world similar to those that I loved to read about while growing up. By the first chapter, I was completely hooked. The way she uses vivid, emotion-grabbing imagery immediately drew me into this new, strange world. I became captivated by the story of Laia, a girl whose entire life is turned upside down when her brother, Darin, is accused of treason and taken to be tortured in the name of the Emperor. Her strength in the face of danger was inspiring and I came to see her almost as an extension of myself. I felt her fear, her anger, her pain. Although this imagined life I was experiencing was full of sorrow and despair, I could not put the book down. I needed to find Darin and break him free from the Martial prison.

An Ember in the Ashes is one of the few books that I have stayed up until the wee hours of the morning to finish. It is not just a story, it is a journey of love, sacrifice, and courage. I have gone on to read the other two books in the series, A Torch Against the Night and A Reaper at the Gates, both of which lived up to the outstanding expectations that are set in book one and I am patiently waiting for the release of book four. If you, like myself, enjoy high fantasy novels that involve other worlds, I would absolutely recommend that you visit the Martial Empire of An Ember in the Ashes.