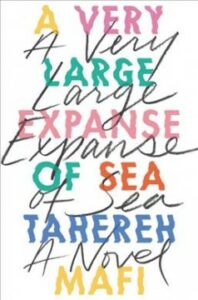 Despite being an avid reader, there are only a few books that I have read all in one sitting, and Tahereh Mafi’s A Very Large Expanse of Sea is one of those select novels. Almost an entire day flew by without me noticing as I simply needed to know how the story ended. The book is set in 2002 and follows the life of Shirin, a teenage girl who has moved from city to city as her parents want to give both her and her older brother the best life and education that they possibly can. Unfortunately though, all of this moving has left Shirin without friends or a support system and this has taken a toll on her happiness. Though each new place has its own unique set of pros/cons, Shirin has become accustomed to being the “odd one out” mainly due to her choice to wear a hijab. Day after day she is subject to both overt and implicit stereotyping, and though she tells herself that she is not bothered by it…this is ultimately not the case. The walls that she has built to protect herself have left her bitter, angry, and alone. That is, until she meets Ocean James, a boy in her newest school who she just cannot understand. Tahereh Mafi’s unique way with words could have me laughing on one page and shaking my head in frustration on the next. Her genuinity gives this novel its power and though it is difficult to read about injustices, the questions that her writing made me consider are crucial.