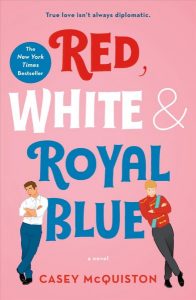 Not many of us will ever experience the pressure that comes from being in the public eye. We won’t have to go through life wondering if the paparazzi is waiting around the corner to catch us buying something embarrassing, or waiting to snap a picture of something that might cause a scandal. For most, we will simply go through life without a worry that our private affairs might one day be splashed on the headlines of gossip magazines or televised on TMZ. But for Alex and Henry, dealing with the hoards of fans and paparazzi is part of daily life. After all, no life can truly be normal when one is either the son of the first female President of the United States, or the Prince of England.

Alex Claremont-Diaz has known since he was young that he was destined to make changes in the world. But when a disaster at the royal wedding occurs, he’s given the opportunity to change things in a way he never imagined. You see, Alex and the younger Prince, Henry have been sworn enemies since Alex’s mom became President and after the pair cause a PR nightmare for both countries, they’re forced to play nice for the world to see.

But what happens when two people who thought that they were enemies, come to see that they have more in common than they originally thought? What if it turns to more? Will there be friendship in the cards for Alex and Henry? Or will they fall back into their old ways and wind up destroying international relations between America and England?

Red, White & Royal Blue by Casey McQuiston is a romantic comedy in literary form. Despite being a fast read (simply because of how great it is), it also offers some real insight into the plight of the LGBTQ+ and minority communities. McQuiston does a fantastic job bringing to light some of the world’s political conundrums in a manner that is still light and refreshing while also packing a punch. Though it is intended for the YA age bracket, some more graphic sex scenes may make it an inappropriate choice for those younger than 15.

This refreshing take on the trope of enemies-to-friends is well worth the read this summer. The book has also recently been picked up for a movie deal, so be on the lookout for that!