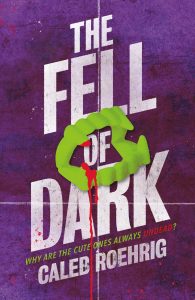 In a town where supernatural beings are known to exist, human children are raised with the knowledge they need to protect themselves. Vampires plague the small town of Fulton Heights, Illinois but the residents know that so long as they stick to curfew and remain inside when the sun sets, they have a much better chance at surviving life in a town where a supernatural nexus converges. Most humans are wise enough to stay away from vampires and their lust for blood. Of course Auggie Pfeiffer is not like most humans.

Suffering from nightmares that seem far too real to be something his mind has created, Auggie finds himself in the middle of a swirling superstorm of supernatural issues. Oh and if that wasn’t enough, he’s also developed an inconvenient crush on Jude, a vampire who’s nearly 400 years older than Auggie.

So when Auggie’s world as he knows it begins to fall apart, who is he going to rely on to get him through it.

Caleb Roehrig, the author known for his debut novel Last Seen Leaving has managed to give his audience another fantastic novel which harkens back to the popular vampire tropes of years passed. His writing keeps you on the edge of your seat as you follow Auggie down the rabbit hole of the supernatural, and leaves you feeling satisfied on the other side. And though this novel is classed under Young Adult, the writing feels mature and interesting even to an adult reader like myself.

If you yourself, like me, were once a fan of all things vampiric, then this novel is certainly worth reading. You may even find yourself longing for more LGBTQIA supernatural novels by the end of it, in which case you should check out These Witches Don’t Burn by Isabel Sterling or Cemetery Boys by Aiden Thomas.