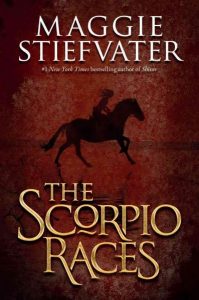 It the first day of November and so today, some will die.”

Maggie Stiefvater’s The Scorpio Races takes you to the small island village of Thisby. Despite Thisby’s rolling hills and picture-perfect coast, this is a place haunted by tragedy. Creatures known as water horses are vicious beings who emerge from the sea on the hunt for their next meal. Thanks to their magical qualities, they are stronger and more dangerous than regular horses…which make them the perfect choice for the annual race held on the salty shore.

The story is told from two perspectives, one is a young, feisty girl named Puck, and the other a more stoic gentleman who goes by the name Sean Kendrick. Both have entered the races this year, but for vastly different reasons. Puck does so to avoid an unimaginable fate, whereas Sean is a four-time champion of the event. Though the two seem so different, their stories become entwined as they race to overcome the obstacles that seem to be blocking them from happiness.