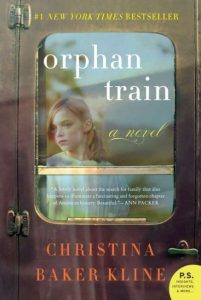 “So is it just human nature to believe that things happen for a reason – to find some shred of meaning even in the worst experiences?”

To be honest, had it not been a book club selection I probably would have never heard about Christina Baker Kline’s novel Orphan Train. Despite this novel being extremely decorated in terms of accolades (I mean, it was in the Top 5 on the New York Bestseller list for a year), it just wasn’t anywhere in my “to be read” list. Perhaps this is because, as someone who typically reads YA Fiction and fantasy novels, I have not stayed up-to-date with the world of historical fiction. Nonetheless, within the first chapter I was completely hooked, as Kline paints a vivid picture of life as an orphan in the 1900s. The story is split between two characters, and two time periods. The first character we meet is a somewhat-rebellious teenager named Molly who is about to age out of the foster care system. Though she excels in school and is an avid reader, Molly’s foster mother cannot accept her and instead views her as a burden that must be endured. Then, we get to meet Vivian. A young orphan girl who immigrated to the United States from Ireland with her family in the early 1900s. Like Molly, Vivian quickly loses her family and becomes an orphan. Thus begins her travels on the “orphan train.” Life on the train is unpleasant, and though the adults who run the program mean well, their strict nature only intensifies the situation. I was shocked to learn about this practice and found Kline’s portrayal of Vivian’s journey to be both poignant and well-researched. Similarly, thanks to Kline’s beautiful writing, their stories touched my heart. With each page, I felt their pain, their happiness, their sorrow.

Ultimately, Molly and Vivian’s stories are tied together through acts of resilience, feelings of loneliness, and the yearning to be accepted. Though they both live in different circumstances, each character forces you to ask the same question; how can we make sense of and cope with personal suffering?